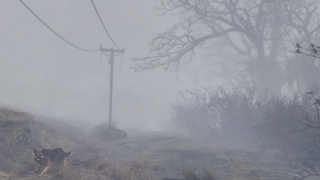 Post-Nuclear Silent Hill? To this I say: No, thanks, I’m good. I don’t need that and it sounds terrifying. But if it sounds like something you would like then I have the mod for you.

Whispering Hills tweaks Fallout 4 into a foggy, twisted hellscape where you can be dragged into a world of horrors at any time. The mod overhauls the environment of Fallout 4’s Commonwealth by adding ten different thick fog weathers effects, amping up the surprises pretty thoroughly. The background sounds are also removed and replaced by far spookier ones. As you play, you can be “dragged into the otherworld” and forced to face hordes of monsters for a few minutes—creatures like Ghouls, twisted Silent Hill nurses, Twin-Head Screamers, and mutant Dogs.

The mod has been around for about a year, but recently got a big update including a new thing I now hate and fear: A lurking horror called “Sirenhead.” Seriously:

That’s a hard pass from me, my friends. You can find the terror of whispering hills over on ModDB. Let me know what it’s like if you install it because I am too afraid to do so.