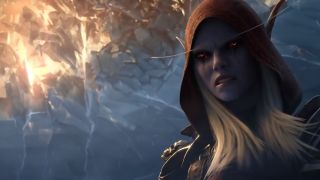 With a new expansion due out later this summer, 2020 is gearing up to be another major year for World of Warcraft. And it could definitely use a win. Though Battle for Azeroth has been steadily improving since launch, the new Shadowlands expansion promises a clean slate for those frustrated by Battle for Azeroth's pointless grinding and often underwhelming group activities—not to mention its barely comprehensible story.

Major patches can only do so much, but a new expansion is a chance for Blizzard to press reset and throw out what wasn't working, iterate on what was, and introduce a whole swathe of new ideas and systems too. And whether you're a faithful devout or a cynical veteran, there's no denying that the release of a new expansion is always an exciting time in Azeroth.

But what else can players expect from Warcraft in 2020? Here's a quick breakdown of everything happening this year.

Update 8.3 will be a nice, if underwhelming, end to Battle for Azeroth

Though internet commenters will have you think Battle for Azeroth is a hot pile of garbage, the truth is that Warcraft's contentious current expansion has been getting noticeably better with each major update. In patch 8.2 Rise of Azshara, for example, Blizzard finally overhauled the much-despised Azerite Armor and Heart of Azeroth system, turning the Heart of Azeroth into a piece of equipment that could be customized with special essences found from a variety of places.

Those steady improvements will likely carry into update 8.3, Visions of N'Zoth, but I don't think it's going to change people's opinions on Battle for Azeroth as a whole. Due out on January 14, Visions of N'Zoth introduces a ton of new features, including a new raid, Old God assaults on two new zones, and a new mode called Horrific Visions that's somewhat inspired by Legion's ultra-difficult Mage Tower challenge. It'll also put a final wrap on Battle for Azeroth's story and set the stage for Shadowlands.

Given just how turbulent Battle for Azeroth has been so far, though, I don't think Visions of N'Zoth will do much to improve anyone's feelings on this expansion. Though a final confrontation against the only living Old God is exciting, Battle for Azeroth's story has been convoluted and hamfisted in a way that makes it hard to care about what's happening—and a smattering of new progression systems won't change that.

In the end, I'm expecting Visions of N'Zoth to feel more like necessary filler to chew on while we wait for Shadowlands' summer release. Like the current Rise of Azshara update, that'll probably mean lots of grinding for the sake of grinding—but with a new expansion just around the corner is it even worth it if all that progress will be thrown out in a few months?

The upcoming level squish will break everything for a bit

One of the most exciting features in Shadowlands actually has nothing to do with the expansion itself. Sometime before its launch, Blizzard will be squishing the level cap down to the original limit of 60, completely overhauling how leveling a new character works in the process. The idea is simple: Having to level a character all the way to 120 is becoming a bit much, especially when so many of those levels don't have any material reward and feel like pointless filler. So instead, Blizzard will squish everything down so that current level 120 players will now be level 50 at the start of Shadowlands and reach level 60 by the end of its main campaign.

New players, on the other hand, will still start at level 1 but will begin their journey in an entirely new zone called Exile's Reach. Unlike the current starting zones, which are outdated and boring, Exile's Reach will feature all of the modern quest and dungeon design that makes Warcraft fun.

After players reach level 10 and complete Exile's Reach, they'll then choose an expansion to level through in its entirety which will take them all the way up to level 50. Newcomers will play through Battle for Azeroth to get caught up with the story, but any of WoW's previous expansions are available to veterans. It's not clear what will happen to characters who aren't already level 120, though my guess is that their level will be scaled down accordingly.

But what I can guarantee is that all of this will be horrifically broken for the first few weeks. Every time Blizzard has made any changes to the underlying math behind character progression—like when it squished character stats and item levels at the beginning of Battle for Azeroth—the result is all sorts of nasty bugs and terribly unbalanced combat encounters. Dungeon bosses will probably be too strong or too weak, certain abilities might do unfathomable amounts of damage, and all sorts of level requirements might break.

If you're trying to level a new character during this time this will likely be frustrating as all hell, but it's best to embrace the chaos brought on by these sweeping changes as an inevitable part of updating a 15-year-old MMO. Or maybe just wait a few weeks until after Blizzard has managed to release a few hotfixes before starting a new character.

Shadowbringers will make WoW feel like an RPG again

Maybe I'm being recklessly optimistic, but I'm a firm believer that World of Warcraft expansions follow a predictable cycle of being good and then being not so good. Mists of Pandaria? Good. Warlords of Draenor? Not so good. Legion? Good. You get the idea.

Everything Blizzard has revealed about Shadowlands (which is a lot) has so far sounded great. I love that its main campaign will be a linear story rather than letting you tackle zones in any order you wish, which makes the narrative often feel jumbled. Likewise, it seems Blizzard is really listening to some of the biggest complaints people had about the past few expansions. Ultra-powerful Legendary items are returning but without all the bullshit RNG, for example, and the endgame zone of The Maw promises to restore some much-needed challenge to World of Warcraft's open-world areas.

What's most exciting, though, is how Shadowlands seems to be adding some much-needed depth back into World of Warcraft. Most races are getting brand new customization options and many abilities that were once pruned from classes are making a return, which should hopefully bring some of the flavor back to certain class specializations. But that's just the beginning. At the end of Shadowlands' main campaign, players will have to choose one of four Covenants to join, each unlocking unique abilities. Furthermore, each Covenant has characters that a player can 'soulbind' with, which grants other useful combat bonuses.

That kind of customization even extends to the new Legendaries that players can craft. Instead of randomly being rewarded with one, players will craft their own Legendary over time and choose which abilities they want it to have, giving them full control over their build rather than praying to the RNG gods for the perfect Legendary drop.

Unlike Legion and Battle for Azeroth, Shadowlands won't feature an infinitely grindable resource, either. Instead of feeling like you have to spend all your time grinding a resource just to stay competitive, Blizzard is putting a caps on how much you can earn in a day with the intent of encouraging players to spend more time doing what they want instead of feeling burdened by pointless chores. These are all positive changes that I think will go a long way toward making WoW feel like a proper RPG again.

The last few expansions have stuck to a similar cycle of releasing in the summer with their first major update coming later that fall. Assuming Shadowlands actually releases this summer and not later, it's a safe bet that update 9.1 will come a few months after.

I wouldn't get too excited, though. Historically, the x.1 updates for each expansion tend to be smaller in scope—a kind of stopgap between the enormous influx of new features at launch and the x.2 update that introduces entirely new zones and even more new features. What the first update for Shadowlands will contain is anyone's guess, but you can bet it'll also be Blizzard's first chance to correct its course on any features that didn't quite hit the mark at launch. The first update for Battle for Azeroth, for example, made small adjustments to Azerite Armor to make it easier to obtain and tried to rebalance several classes that had been gutted in the original launch patch.

In a similar fashion, 9.1 will be Blizzard's first chance to respond to player feedback from Shadowlands' initial launch. I'm just praying that there's nothing that misses the mark in Shadowlands quite as bad as Azerite Armor in Battle for Azeroth. Though patch 8.1 did make some changes, Azerite Armor and the Heart of Azeroth weren't really fixed until nearly a year later because their flaws were so deeply baked into the core progression system. I'm praying that Shadowlands doesn't have any problems as deep-rooted.