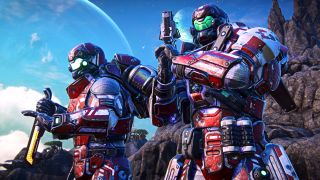 Update: The raffle is now over. Congratulations to the winner!

PlanetSide Arena, the large-scale, match-based sci-fi shooter from Daybreak launching at the end of September, is hosting a demo on Thursday, September 12, starting at 10 am PDT / 5 pm GMT.

It's a pretty quick demo—it will only be active for two hours—but we'll be there playing and with a bit of luck, you can be there too. We've got 30 Steam keys to give away for this PlanetSide Arena demo, which we know isn't enough for everyone. But below you can enter a raffle for a chance to win a Steam key and get an early look at the game.

The keys, should you win one, will also work while PlanetSide Arena is in Early Access starting on September 19. (Update: Originally, this post stated the keys would only work for the two-hour demo.)

To enter the raffle, just enter your email in the widget below. We won't see the email address you enter and Godankey won't save it—it's only used to send the key to the winners.

This PlanetSide Arena demo is about a 9 GB download, so to give key winners (hopefully) enough time to install the game we'll be closing the raffle and sending out keys at around 6:30 am PDT.

(If you can't see the embedded raffle below, here's a direct link.)