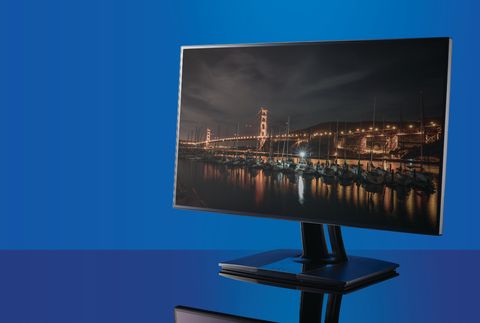 Not quite the ultimate gaming panel, but a fantastic screen at a competitive price.

It’s a truth not acknowledged universally enough, that desktop PCs get a raw deal when it comes to pixel count. After all, fairly affordable laptop PCs with full 4K panels are now widely available. Heck, 1440p is no longer anything special for a smartphone.

Back on the desktop, 4K is about as good as it gets, despite the much larger physical size of desktop panels. At least, it is unless you’re willing to spend megabucks. The net result is that desktop monitors can’t hold a candle to the best portable devices when it comes to pixel density, and thus display crispness and detail. The mitigating factor, of course, is that Windows, and indeed the Internet at large, still doesn’t do a great job of supporting high DPI displays.

That’s part of the context for ViewSonic’s new 32-incher, the VP3268-4K. It threads the needle between smaller 4K panels (that throw up issues in Windows when running the scaling above 100 percent in order to maintain legibility) and larger 40-inch-plus 4K panels (that remain legible at 100 percent scaling, but suffer from relatively fat, ugly pixels); 32 inches at 4K is something of a sweet spot.

The VP3268-4K’s other defining feature is its status as a semi-pro quality display. For $820, you can’t expect to get a full professional grade monitor, especially not one of this generous scale, but ViewSonic has delivered a nice display all the same.

The foundation of the VP3268-4K’s excellent performance is a gorgeous IPS LCD panel. In most regards, it’s a conventional rather than cutting-edge panel—it doesn’t sport snazzinesses such as a quantum dot-enhanced backlight or the super-high refresh rate of the best gaming monitors, for instance. Instead, it delivers on core image fidelity.

Subjectively, it’s a lovely thing to look at, alive with convincing, natural hues, and offering plenty of contrast. The latter, incidentally, is rated at 1,300:1, which is a useful step up on the typical 1,000:1 static contrast that most IPS panels are pegged at. Out of the box, you’ll struggle to find any significant flaws or defects. OK, the VP3268-4K probably isn’t as punchy and saturated as Asus’s quantum dot-enhanced ProArt PA329Q, but that is a substantially more expensive panel.

With its super-slim bezel, high-quality enclosure, and fully adjustable stand augmenting the classy visuals, the overall experience is extremely impressive. We also noticed an absence of input lag and decent pixel response, the latter enabled by the availability of pixel overdrive in the OSD menu. This isn’t pitched as a gaming monitor, in other words, but you can still have a darn good time playing games on the VP3268-4K.

The VP3268-4K is also impressive by the numbers. ViewSonic ships it with support for an extensive array of color spaces, including sRGB, Rec. 709, SMPTE-C, and EBU, each of which is pre-calibrated to DeltaE levels of below 2.0, and confirmed in the factory calibration report. Toggling between these modes is a cinch via a comprehensive set of OSD menu options. While really serious professionals may prefer to calibrate the panel themselves, for those who lack the hardware or inclination to self-calibrate, the precalibrated presets will come in very handy.

The panel itself is also a true 8-bit affair, with support for a 14-bit look-up table; 10-bit per channel color is also offered, albeit through dithering, rather than native support. For native 10-bit color, you’d have to spend a lot more money. Overall, then, the new VP3268-4K doesn’t break new ground. It isn’t quite the last word in professional features. It’s not the ultimate gaming panel. But it is a fantastic screen at a competitive price.

Not quite the ultimate gaming panel, but a fantastic screen at a competitive price.