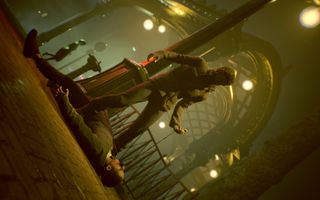 Vampire: The Masquerade—Bloodlines makes you pick a vampire clan, this game-defining choice, before they've even introduced themselves, but its sequel promises to give you a bit more time to make this huge decision. Bloodlines 2 will let you pick from five clans, but at the start, you're just a fledgling thin-blood vampire without any mates.

The delayed choice gives players time to "understand what a clan means so they can make more informed choices," explains Andy Kipling, Hardsuit Labs CEO. "Rather than making a decision up-front and getting 30 minutes into the game and going "Damn I wish I'd chosen something else'".

But what clans will we be able to choose? So far, Paradox and Hardsuit Labs are keeping the list to themselves, but there are hints.

"We wanted to pick those clans that deliver a clear player fantasy," says Christian Schlütter, lead producer. "If I'm someone who just likes to punch people in the face, we have a clan for you. If I'm someone that ... in a normal roleplaying game, would play a wizard or something, we also have a clan for that."

Punching and wizards. The last one immediately calls to mind the Tremere, a clan of mages that became vampires in an mystic ritual. They're one of the top dogs in the modern era, and while all the clans have preternatural abilities, the Tremere are the really the only ones you'd call wizards.

As for punching, both the Brujah and the Gangrel seem like good candidates. The Gangrel aren't really into cities—they're a bit feral—but Seattle is pretty close to loads of trees, right? I'm sure they'd be fine. The rebellious Brujah seem like a much better fit for Seattle, though. Between punches, they could help Amazon workers unionise.

No Malkavian hints were dropped, but I'm still holding out hope for the best clan. In the original Bloodlines, the Malkavian dialogue and insight transform the game and pull back the curtain a little bit—it's excellent second playthrough material and hopefully will be again. We do know that you'll need to play with different clans to see everything in Bloodlines 2.

Check out the latest issue of the PC Gamer magazine to read more from our interview with Paradox and Hardsuit Labs, out this Thursday in the UK.