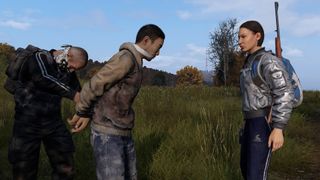 THQ Nordic has opened up a new studio with former Bohemia Interactive staff to develop a new survival shooter.

Operating out of Bratislava, the capital of Slovakia, Nine Rock Games is being headed up by David Durcak. Durcak is best known for his work at ArmA and DayZ developer Bohemia Interactive, where he was a project lead. Joining him are other former Bohemia developers, and others who worked at Cauldron on games like Soldier of Fortune: Payback, Conan (2004), and Chaser. Bohemia Interactive acquired Cauldron in 2014.

With this sort of pedigree, it's no surprise that Nine Rock Games' first project will be a survival shooter—although the project's name and release date a way off yet.

As Gamesindustry.biz notes, THQ Nordic's parent company, the Embracer Group, has been launching a fair few new studios recently. Last month it announced it was opening River End Games in Sweden, and C77 Entertainment in Seattle. River End is currently working on a new property with a "deep narrative", while C77 includes alumni from the likes of 343 Studios and EA DICE, which could suggest it is working on a more bombastic, mainstream-friendly shooter.

Despite controversy surrounding it using 8Chan as an outlet for PR in 2019, THQ Nordic has been doing rather well. In 2019, it reported a 713% increase in sales from 2019, while in Q1 2019 it made a tasty €151 million in revenue. Since picking up the THQ name and rebranding from Nordic Games in 2016, it's been picking up properties left and right, including Kingdoms of Amalur, TimeSplitters, Expeditions, Carmageddon, Darksiders, Outcast, Alone in the Dark and Gothic. Embracer Group has also been gobbling up studios, with the most recent being Little Nightmares' Tarsier Studios in December.

We can expect to hear more of Nine Rock Games' first project in the next few months.