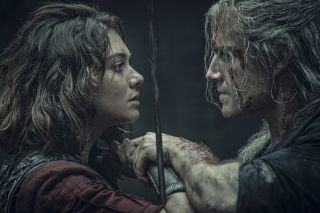 With the Witcher Netflix series out now (and quite good!) and The Witcher 3 seeing more concurrent players than ever, there's a lot of renewed interest in the root of all this: The Witcher books. If you want to fill a Geralt-shaped hole in your life following the show and games, the books are definitely worth a read.

It's not quite as easy as one, two, three, though. As a brief overview, the book series is written by Polish author Andrzej Sapkowski and follows a man named Geralt who happens to be a Witcher—someone attuned with supernatural abilities and trained from childhood to battle beasts that threaten the public. Of course, the books are about more than that: there’s plenty of drama, sex, politics, and even some comedy, but the central arc follows Geralt as he protects Ciri, a princess whose country has been conquered.

If you want sword-wielding action and grotesque monsters, you’re in the right place. The series started as a set of short stories in the '80s for a Polish fantasy magazine, and the initial tale came third in their competition to find new ideas and writers. The stories were so popular they then went on to spawn full-length novels, which were then published in Polish in 1993. The books were released in English a bit late, from 2007, with Danusia Stok translating the first two and David French taking over duties the third book - so we know who to thank for bringing them to us English-speaking fans. The books then eventually became the games (and now show) we know and love.

Where to start with The Witcher books

You’ll want to start with The Last Wish. While it was published later on, it features stories set before the first full-length book and establishes the Continent as a backdrop. It also introduces the reader to Geralt and the basics of what a witcher is and what one does. You’ll read about Geralt fighting beasts, indulging in bar room fights, and his bedroom escapades.

This set of stories introduces everything you’ll see in the games. Sapkowski tells of Geralt’s silver sword with which he kills the monsters of magic, he depicts the often-corrupt governments that reside throughout the world, and we meet an ensemble of characters. These include Dandelion (aka Jaskier), a poet friend of Geralt who is hearing these tales we’re experiencing, Yennifer, a sorceress with whom Geralt begins a troubled relationship, and Triss, also a sorceress, a friend of Geralt but also the third point of the Geralt, Yennifer and Triss love triangle.

The second short story collection, Sword of Destiny, must follow because it’s here we meet Ciri, and each story takes place directly before the main novels.

What's the reading order of The Witcher books?

Following the short stories, you would think it's best to read the rest of the books in the order they were published, but a recent release, Season of Storms, actually takes place within the stories of The Last Wish. To be honest, it’s only worth reading Season of Storms if you want to experience everything The Witcher has to offer, as the events that take place are not integral to the main arc—but it does sow some seeds of what’s to come in the rest of the series.

Otherwise, read the books in the order they were released: Blood of Elves, Time of Contempt, Baptism of Fire, The Tower of the Swallow and The Lady of the Lake.

Away from the novels, it’s also worth reading The World of the Witcher, which is a compendium of information created directly by CD Projekt Red. It’s a beautifully illustrated addition to the series that contains everything you’ll want to know about monsters, weapons, people and places. Be warned, though, it does feature spoilers for the games and the books.

There is a designated Witcher 3: Wild Hunt art book but it is pretty rare as it was released only with collector's editions. One to look out for though; I know I always do. And there's yet more artwork available now following the release of the Gwent game, as it too now has its own art book: The Art of the Witcher: Gwent Gallery Collection. And to finish the art side of things off, there's a Witcher Adult Coloring Book that will keep you occupied long into the night, giving your favorite characters unique outfits and painting your own Witcher pictures.

Aside from the short stories and novels, graphic novels from Dark Horse Comics have been released. While not written by Sapkowski, the comics do a great job of adding extras to already released stories, plus they look great as the art evokes the nasty themes of the books and games. Volume 1, Volume 2 and Volume 3 all include several stories each, while a collated Library Edition packs everything in one.

Why should I read them if I’ve played the games?

In a nutshell, because they’re good books and a great way to get more Witcher in you. They are fun, accessible reads with a fast pace. Of course, it depends on your personal tastes, but generally the novels and short stories are good fun. It would be easy to say "well, much like films, the books are better," but that isn’t generally the case here, as the games give you a better view of the action within this setting, while still delivering a genuinely great story.

Reading the books will, however, give you a better sense of the world, flesh out more of the cast and create a stronger bond between yourself and the situations in the lore. Characters are drawn with more depth, and although much of the plot will be known to you if you played the games, the books fill in small gaps here and there.

How faithful are The Witcher games to the books?

Very, though only so much of the books was directly brought to the games. CD Projekt Red went to great lengths to bring Sapkowski’s witty, wry and strong Geralt of Rivia to players of the games. Due to the branching narratives of the games, the plot is "based" on the books, rather than a direct retelling. Everything you’ve seen in the games, however, from runes to weapons and monsters are featured in the series of novels.

There’s an interesting divide between how Sapkowski sees his world and how it was translated to games, but readers will notice only small differences here and there. Coming to the books from the games brings a certain spark of life to the battles and fights.

It's worth noting though that a game, especially one of the quality featured in The Witcher series, is designed to bring excitement and danger. This can make some sections of the book—mainly the political discussions—rather dull in comparison. The games, because they deliver the story in bite-sized chunks between the killing and hunting, offer the most accessible way to consume the tale of Geralt.

How faithful to the books is the Netflix Witcher series?

A lot more than the games, by design. Officially, the Witcher show is based directly on the books, not the games. That said, the show takes some liberties, particularity with timing. To more naturally introduce viewers to Geralt and the world around him, Season 1's story is a combination of The Last Wish's short stories and the beginning of Ciri's arc in Sword of Destiny.

It's a bit confusing, the Netflix put together a gorgeous timeline map to keep it all straight (spoiler warning for the books, obviously).

Where can I get all these books?

Since the profile of The Witcher series and books has been elevated to brilliant, world-famous heights, the books, on the whole, are available from all the major retailers, including Amazon. The only one that is a bit difficult to get, as mentioned above, is the collector's edition Witcher 3 art book but it usually appears on eBay occasionally. However, for your ease and comfort, see the best prices currently going on all the books below.