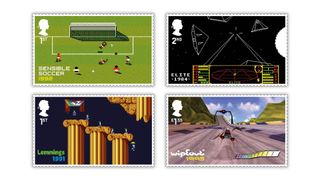 Commemorative stamps are something of a British institution. Other countries do them, of course, but we bloody love them. It's the kind of twee distraction we live for. Past collections have included Star Wars, David Bowie, James Bond, and other cultural behemoths—so it's about time videogames got a shot, eh?

There are 8 stamps in total, each featuring a classic UK-developed videogame—Elite, Sensible Soccer, WipEout, Dizzy, Worms, Lemmings, Micro Machines, and Populous. There are some special Tomb Raider stamps available too, Lara Croft being one of our country's most popular exports.

It's all very charming, and it's nice to see videogames considered something of genuine cultural worth by the Royal Mail. The stamps go on sale on January 21st, but you can pre-order them now if you're an avid stamp collector.

"The UK has been at the forefront of the video games industry for decades,” Royal Mail spokesperson Philip Parker told The Guardian. "In the 1980s and '90s young designers grappled with coding on the new microcomputers and set the template for the industry with iconic games. We celebrate some of their landmark creations on stamps."

If this series is a success, might we suggest the Royal Mail release a collection of stamps based on PC gaming? We have some ideas...