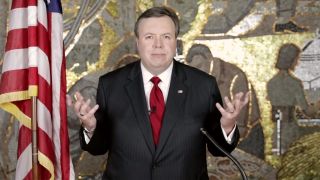 EVE Online's developer CCP Games caused quite a stir a few weeks ago when it permanently banned Brian Schoeneman, a real-life lobbyist who leveraged his real-world political experience to get elected into EVE's own council of in-game politicians.

At the time, CCP accused Schoeneman, known in-game as Brisc Rubal, and two others of using confidential information protected under a non-disclosure agreement to gain a financial edge in-game—EVE Online's own version of insider trading. But today, after conducting a full investigation, CCP Games has announced they got it all wrong and the affected parties have been unbanned.

"We have completed our review of the Brisc Rubal investigation and determined that our initial findings were incorrect," reads CCP Games' apology. "Neither Brisc Rubal nor the other players implicated in this incident breached CCP’s confidentiality, the terms of the Non-Disclosure Agreement, or used privileged information to obtain an in-game advantage."

Schoeneman is a maritime law lobbyist and lawyer in the United States. Back in May of 2018, he began campaigning to be elected to EVE Online's Council of Stellar Management (CSM), leveraging his real-life political experience to prove why he was suited to the job.

EVE Online's CSM acts as intermediaries between developer CCP Games and its playerbase, lobbying for various changes to the 15-year-old MMO while also providing feedback on highly confidential, upcoming features.

On April 8, in a now-deleted blog post by CCP Games, Schoeneman and two others were accused of using that confidential information to engage in illicit in-game transactions, and Schoeneman was banned permanently. The two other players involved received one-year bans. But considering all three players were high-ranking members of The Initiative, one of EVE Online's biggest alliances, the news was especially troubling to the thousands of Initiative pilots who suddenly found themselves without leadership.

Shortly after, Schoeneman released a statement denying CCP Games' accusation that he broke any non-disclosure agreement or conducted any illicit transactions. "The claims that I would risk my reputation by providing proprietary or otherwise confidential information to members of my own alliance for personal gain are false," he said in a statement.

Unfortunately for Schoeneman, CCP Games can ban its players for any reason. EVE Online's terms of service, which all players must agree to, state that "CCP reserves the right to close, temporarily or permanently, any user’s account without advance notice as we deem necessary."

Regardless of whether Schoeneman and the two others were innocent—as many suspected they were—CCP Games had made their decision.

Then, last week, CCP issued a statement that it was conducting a more thorough investigation into the incident. "As should be expected, we will issue a full and frank apology for any mistakes for which we are responsible, as well as provide appropriate reparations to those affected by any erroneous actions we’ve taken." CCP Games said at the time, which sounded all too much like a preemptive apology.

Today, that investigation revealed that the initial evidence presented to CCP Games was inconclusive and that Schoeneman and the two banned players were actually innocent. "We made a mistake here and we offer our formal apologies," reads CCP Games' apology. "First, to Brisc Rubal and the two other players involved, both for making the allegations and for the disturbance and stress caused by the way in which we handled this situation. Second, for not collaborating with due care with the members of CSM 13, who have acted responsibly throughout. Lastly, we owe our sincere apology to the EVE community for this error. We take full responsibility for any confusion and mistrust caused by our initial assessment of the situation."

This announcement has rocked the EVE community. Over on the EVE Online subreddit, a thread containing the statement has nearly 300 comments already with players expressing exasperation and anger at CCP Games. "What an absolute cluster-fuck on CCP's part," reads one comment.

I reached out to Schoeneman for comment and he forwarded me a joint statement with CCP Games that says he "has accepted CCP Games’ apology" and that he "holds no ill-will or residual acrimony against CCP."

Unsurprisingly, Schoeneman has decided to resign from the CSM and doesn't intend to run in next year's election.