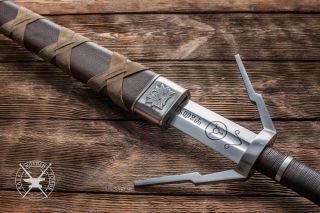 Swordsmith Artur Wysocki has too many emails: Over 300 in the past few days, he says. After The Witcher on Netflix spurred a renewed interest in the Witcher books and games, the only smith licensed by CD Projekt to forge and sell swords based on the designs of the games will likely have a few more requests than usual.

Kaer Morhen Forge is a hobby and side-business for Wysocki, and he doesn't keep any in stock, but crafts the weapons for between €400 to €900 on commission (around $440 to $990 USD). Rune inscriptions and handmade scabbards cost extra.

His "silver swords," such as the Mastercrafted Wolven Silver Sword, are actually steel, but can be galvanized in silver. In January, he revealed a sword with a 1 millimeter silver coating, which a buyer unconcerned with cost might be able to request. It is very shiny:

As the swords are made to order, they can be forged to different hardness, sharpness, and balance specifications, ranging from potentially deadly to still-a-bad-idea-to-swing-around-if-you-don't-know-what-you're-doing.

Wysocki is based in Katowice, Poland, but can ship internationally. Like the swords themselves, that won't be cheap, and is subject to whatever local restrictions on monster-slaying weapons exist.

You can see more of Wysocki's swords, photographed by Michał Sygut, on the Kaer Morhen Forge official site and Facebook page.