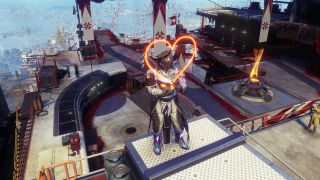 In this quiet period for new releases, it's a great time to clear out the backlog and get reacquainted with some older favourites. I've been doing just that, using these lean months as an excuse to finish off some RPGs and tour the online worlds that once consumed my time. And also to continue playing Destiny 2 against all good logic and reason.

There's one thing that all of the games I'm playing right now share: my enjoyment of them is made possible by the efforts of other players.

Theorycrafting is the science of divining the numbers that define a game's systems and using that knowledge to create the most efficient builds and strategies. And then—and this is the remarkable part—sharing those discoveries with others, rather than greedily hoarding the best secrets for yourself. With a large enough community, the information is shared and collated and repackaged, in the best cases in an easily parsed form that anyone looking for a shortcut to success can understand. We are standing on the shoulders of mathematicians.

Thanks to the work of theorycrafters, for instance, I can return to a game like Guild Wars 2 without having to pour through over a year of balance patches; without painstakingly trying to decipher the effects of a 5% reduction here, or an extended cooldown there. Instead, I can leisurely browse Metabattle, look for a top rated Thief build and think, "yeah, that looks like fun." Instantly, with absolutely no work at all, I'm caught up and ready to be an effective World vs World squadmate.

Metabattle is one of the best sites I've encountered for sharing builds. Both clear and thorough, it offers guides for each of Guild Wars 2's nine professions, each grouped by activity type and sorted by rating. Crucially, though, it goes even further, by explaining how to even use the build in the first place. This is incredibly helpful: You can have the best gear and the most complimentary traits, but they mean nothing if you don't know how to capitalise on them. By detailing everything from playstyle to skill rotation, these write-ups not only arm you with the knowledge needed to make the most of your new build, but also effectively brief you on whether or not you'll enjoy playing it in the first place. In a battle between two top-rated Thief builds, I know from experience that I'll enjoy the one based on evasion more, and so get to choose accordingly.

While writing this, I've had to stop myself from falling into the self-deprecating trap of typing 'I'm too lazy to figure out builds.' It wouldn't be entirely untrue, but it's more that I just don't enjoy the act of experimentation. Right now, in Destiny 2, a seasonal event is making it incredibly easy to grind for new rolls of Bygones, a pulse rifle that I like a lot. As a result, I have over 50 of them in my vault right now, each slightly different from the last. And I like the hunt—working towards the best version of something I enjoy. But just thinking of how many hours it would take to test each one is exhausting. Especially when the answer is already out there, waiting.

I have played enough Destiny 2 to have a good sense of which perks work for me, and where my tastes vary from the the received wisdom around the best rolls. But still, there are too many variables in each of Destiny's guns to rely entirely on experience. If enough people—backed up by r/sharditkeepit's ever-expanding god roll list—tell me that Arrowhead Brake sights and a Ricochet Rounds magazine is the best Bygones roll, I'm just going to believe them.

I like to think that theorycrafters get something out of this seemingly one-way relationship. More good players means more good teammates and more competitive opponents, making the game more interesting and enjoyable. A rising tide lifts all boats, even if those boats are pointed at each other, wielding guns and fusion rifles and sometimes swords. If I'm being honest, though, I'm contributing nothing. I find a build, I use it, and I reap the benefits without ever having to even think about the effort that went into making it happen.

Instead, then, I'll just say here, to all of the theorycrafters out there, whatever the game trapped under their inscrutable gaze: thanks.