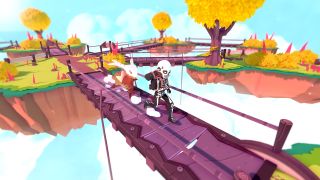 Temtem starters: pick the best one for you
Temtem type chart: every type's strengths and weaknesses
Temtem Luma: how to find them
Temtem list: all the species we know so far
Temtem Ganki: catch the best Temtem in the game
Temtem Oceara: make the rare Water type yours

If you’re at all familiar with Pokémon, know that Temtem evolutions work in a similar way. One of the first things budding trainers ask themselves when picking a starter is when will they evolve? Your first pick often becomes one of your most powerful allies, so that may play a role in the cute critter you choose.

That said, when it comes to these creatures more generally, some Temtem are only available in their base form, whereas others can evolve into secondary and tertiary variants. There's also another branch that ignores the standard evolution stages: Meta-mimetic Temtem are rare creatures that evolve into different forms, dependent on specific circumstances. Only one of these has been revealed so far: Tuwai (Wind-type) evolves into Tuvine (Wind and Crystal-type), when taken to the Crystal Shrine.

For now I'm sticking to the starters, though, but I'll be updating this guide with the Temtem evolutions you should target in due course. So, here's how to level them and how you can expect your starters to evolve.

Temtem evolution: how to make your followers more powerful

So far, there's only one way to evolve your Temtem: levelling them up. Each Temtem has individual evolution level requirements, so expect your squad to evolve at different rates. To level your Temtem, involve them in battles, or tame other Temtem to earn experience.

That said, if you prefer your Temtem in their cutesy original form, you can cancel it by pressing 'Esc' on your keyboard as the evolution is taking place (B on an Xbox pad). Also there's a 'Cancel Evolution' button in the bottom-right corner of the screen.

Each of the three Temtem starters has three evolutionary stages, although their final forms have not yet been revealed. Also, check our Temtem type list so you can see the strengths and weaknesses of your potential starting pick. Anyway, the starting Temtem evolutions are:

Once your Crystle reaches level 30, it evolves into Sherald. It remains the Temtem of choice for those looking to add a tank to their squad: Crystle's evolved form is strong in both its health and defensive stats.

Smazee evolves into Baboong at level 29. Keep an eye on this Temtem for its relatively-strong speed, strength, and stamina.

Get Houchic to level 29 to see it evolve into Tental, and see serious boosts to its special attack and speed.