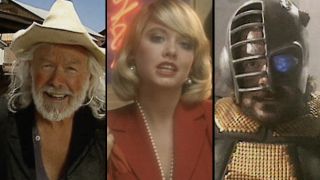 Every week, Richard Cobbett rolls the dice to bring you an obscure slice of gaming history, from lost gems to weapons grade atrocities. This week, no, it's not a surreal question asked of an outlaw. It's a look back at American Laser Games - the company that put the 'video' into videogames.

It's video time again, folks. In more ways than one. Saddle up, then lock and load, for a snarky look at the PC versions of the lightgun games that took arcades by storm back in the ancient 90s.

First up, a quickie about timings. Due to the way these games work, a lot of the footage had to be reassembled to get a proper flow - I've tried to keep it as accurate as possible, but it's not going to be perfect. The DOS and Windows copies react instantly, the DVD versions... not so much. Some of the gunshots are also foleyed in where it was silly not to have any sound at all. Basically, yes, some tweaking and editing has been done, but only in the spirit of reproducing the original experience.

(Aside from one bit, where they're left out for a cheap gag. Ahem.)

Which version of these games should you buy if you're in a nostalgic mood? None of them. The DOS ones are too stodgy, the Windows ones break constantly, and the DVD ones are a nightmare to actually play. The scripting in the latter two is so janky that I'm not even sure it is possible to finish Johnny Rock properly. The DVD version goes so far as to provide a code to bypass the safe puzzle. Mind you, it also claims one of the suspects is called "Pots". Twice. Rather kills the theme-naming, that...

I'm going from memory about the original arcade machines. My memory may be faulty. Sorry for any errors or omissions, but it has been about fifteen years since I saw one of them. Their charm was always the FMV rather than the mechanics though, especially in Space Pirates' low budget universe.

Who Shot Johnny Rock's weapon led to a bit of a question. In these versions, the weapon is a standard pistol - and indeed, that's the weapon your character shows people and seems to be fitted to the original arcade cabinets. This episode of GamesMaster though , in which Tony Slattery fails miserably at the game, shows that it's actually meant to work like a tommy gun - which is also what Wikipedia and other places claim it uses. In short, never having played the arcade machine, I went with the internet's word on that bit. Sorry if the internet turned out to have untruths upon it. If you know for sure, let me know.

The "Who's The Dummy" song is from the always funny You Don't Know Jack, which is available on Steam in some regions, but apparently not the UK. That seems distinctly unfair. Also weird, even if it does have a few too many questions about US things for those of us on this side of the pond.

"Where we we" - Gah. Yes. I know. Can't change it now, but self-kicking has most assuredly happened. Spent ages checking for typos. Missed the one in GIANT WHITE TEXT on a blank background.

Oh, and the Randy bit? Nothing personal, honest. Just seemed the most appropriate recent case to rib a little, and it's only meant as a poke at A:CM's troubles rather than anything too mean. You'll find the original quote here , in enemy territory but never mind, as part of a collection of other hopes that turned out not to be. Don't worry, Alien fans. One day, your prince will come and will be a facehugger.