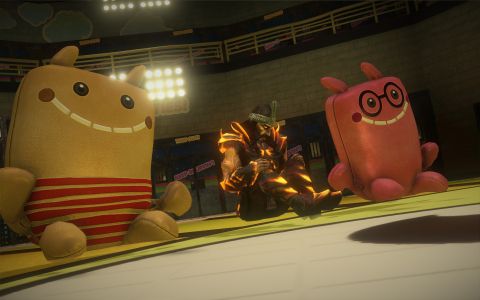 Gat Out of Hell offers all the open-world distractions of a Saints Row game, but precious little of what made the last two so remarkable.

I love Saints Row IV. It's funny, silly and, for a game that features a cast of sociopaths, surprisingly warm hearted. It's also polarising – with some former fans unhappy with the series' transformation into an absurd comedy ensemble. I'm not one of them, and it's important you know how much I enjoy the Saints' last outing, because I don't love Gat Out of Hell. I don't hate it, by any means; but it seldom displays the spark of creativity that made the last two games so good.

Saints Row: Gat Out of Hell is a standalone expansion for Saints Row IV. Rather than "The Boss" – the moldable agent of chaos at the centre of all previous games – you play as returning characters Johnny Gat and Kinzie Kensington. Through a ridiculous set-up involving Kinzie's birthday party and Aleister Crowley's ouija board, The Boss is kidnapped by Satan and forced to marry his daughter, Jezebel. Through an even more ridiculous series of events, the playable duo open their own portal to New Hades with a half-formed plan to rescue him.

Needless to say, this is all great. Unfortunately, it all takes place in a cutscene. Gat Out of Hell's best moments are all in cutscenes, where the characters are free to break out of the rigidity of the game itself. Even worse, the game's best joke – which I won't spoil on the off-chance you haven't seen it – was released in its entirety as a trailer. Were I feeling generous, I'd argue that borrowing the movie industry's trick of spoiling a film's funniest bits shows how far comedy games have come. Really, though, it ruins what could have been a wonderful surprise.

The major problem with Gat Out of Hell is that the series' other traditional methods of delivering jokes – its mission design and scripting – are almost entirely absent. Instead, its mission givers offer playlists of open world mini-game activities. Saints Row IV did this too, but only as a diversion between the main missions. Here, there are no missions. Your job is to complete activities until you've caused enough carnage to attract Satan's wrath. Do so, and you'll unlock the final boss fight. The entire process took me around five hours – albeit with plenty of other activities left on the map.

With no missions, the entire game is reliant on its open world design. Some of this is exceptional. Where in Saints Row IV you could super-jump and glide, in Gat Out of Hell you can fly. It's a brilliant system. You've a limited number of times you can flap your wings while in the air, each one giving a small boost of speed. Your job is to maintain momentum, and with practice you can reach some exhilarating speeds. It gives an entirely new sense of freedom, and makes collecting "Clusters" – collectible souls that upgrade your powers – a joy.

Also of note is New Hades. Its biggest plus is that it's not Steelport, virtual or otherwise. There are similarities, most likely due to sharing an engine with Saints Row IV, but even though it resembles a heavy-metal cover version of the city, it's nonetheless a new place to explore. Great! Only, there isn't much new to do in it. Aside from a few notable exceptions, much of the activities, weapons and super powers are lifted across from the previous game. Your enemies even drop health pick-ups, which makes less sense in hell than it does in Saints Row IV's computer simulation.

Some of the new weapons are fun. The exploding frog launcher was my constant companion throughout the game, and the armchair Gatling gun was funny enough in concept and execution to make it into rotation every now and then. Saints Row's combat has never been its strong suit, though. It's functional, but the system feels more suited to large-scale carnage and mayhem than it does to the moment-to-moment headshotting of demons. Here, the smaller scale stuff seems more prevalent, and the grand set-pieces sorely lacking.

There are only a handful of different activities, each repeated multiple times. Torment Fraud is essentially a reskin of Saints Row IV's Insurance Fraud, in which you throw yourself in front of cars and fight against an irritatingly imprecise ragdoll system. Survival and Mayhem also make the transition, and are similarly identical to previous versions. Of the new events, Hellblazer and Salvation make use of Gat's flight ability, and as such are the best of the bunch.

There are caveats to my disappointment. First, this is an expansion, and so of course it's going to be smaller in scope than a full Saints Row game. Second, it's priced like an expansion. That absolves Gat Out of Hell of a lot of its sins, but nevertheless leaves it feeling restrained and underwhelming.

In Hell's production of Frozen, Jezebel would be Anna.

You can shoot exploding frogs. I have no problem with this.

Saints Row: Gat Out of Hell

Gat Out of Hell offers all the open-world distractions of a Saints Row game, but precious little of what made the last two so remarkable.

Phil Savage
Phil leads PC Gamer's UK team. He was previously the editor of the magazine, and thinks you should definitely subscribe to it. He enjoys RPGs and immersive sims, and can often be found reviewing Hitman games. He's largely responsible for the Tub Geralt thing, but still isn't sorry.
See comments
PC Gamer Newsletter