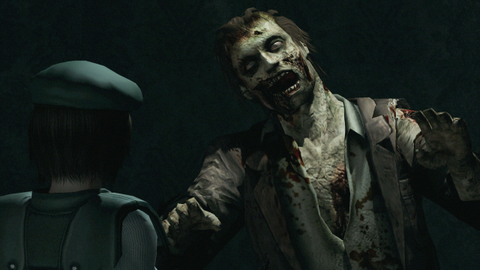 A brilliant, brutal survival horror dripping in atmosphere. Its from the oldest of schools, but still offers a rewarding challenge.

We’re used to feeling like the centre of attention in games, like the whole world revolves around us. But Resident Evil’s zombie-plagued mansion doesn’t care about you. It’s a place where death lurks around every pre-rendered corridor, and if you stumble into one of its sadistic traps or undead denizens, bad luck. It’s back to the main menu with you, and you better hope you saved. It doesn’t hold your hand: it rips it off and eats it.

This is a remastered version of a remake of the original 1996 game, released for the Nintendo Gamecube in 2002. It retains the fixed cameras, rendered backgrounds, and tank controls of Mikami’s pioneering survival horror, but mixes a few things up.

If you know the Spencer mansion from the PlayStation game inside out, there are plenty of surprises. But if you’ve never played the original, this is the best place to start. Even though it’s 13 years old (and based on a 19-year-old game), it’s still worth playing.

You can play through the game as one of two characters. Jill Valentine has more item slots, but less health. Chris Redfield has a smaller inventory, but does more weapon damage. Jill’s story is generally easier, but both present their own challenges. While Jill can unlock some doors with her special item, a lockpick, Chris has to hunt down keys.

There are no respawning items in the atmospheric haunted house setting, so it becomes a game about management: knowing when to fight, when to run away and conserve ammo, and whether to use a health item now or save it for later. Even your saves are finite.

The term is regularly misused, but this really is survival horror. Every wasted bullet or typewriter ink ribbon, used to save, could come back to haunt you later. Even defeated zombies can be a problem, springing back to life as more powerful ‘crimson heads’. You’ll have to devote time and resources to burning their corpses to avoid this.

The ‘remaster’ isn’t as good as I’d hoped. I thought they would have dug the original pre-rendered backgrounds out of some dusty archive and presented them at a higher resolution, but it seems as if they’ve just added a grimy filter to the existing Gamecube files and widened them for 16:9 resolutions.

As a result it doesn’t look spectacular, especially on larger monitors, but the lighting and atmosphere make up for it. Light sources in the world affect your character as you move past them, which does a surprisingly good job of fooling your brain into thinking these are 3D spaces rather than static backgrounds.

The mansion is a wonderfully eerie setting, and the fixed cameras, although archaic, actually add to the tension. The game uses blind corners to great effect, and you’ll often hear the groan of a zombie before you see it.

This makes you play cautiously as you creep through its dingy corridors. Sometimes the camera will be peering at you through a window or floating above you, which gives you an uneasy feeling of being watched. Rather than be hamstrung by their two-dimensional limitations, the devs have used them to make a really effective horror game.

With hardcore survival games frequently topping the Steam charts, Capcom couldn’t have picked a better time to revive Resident Evil. It’s a punishing, but immensely satisfying game, even if the ‘remaster’ isn’t as dramatic as the title suggests.

Some people will undoubtedly be driven away by its old-fashioned sensibilities, and losing progress because you forgot to save can be frustrating, but that’s what makes it special. If it was slick and streamlined, it wouldn’t be scary. If there were checkpoints, there would be no feeling of danger or trepidation.

If you can’t stomach the tank controls there’s a new analogue option that works well with a controller, but the keyboard and mouse controls are pretty clunky. This was a game originally designed for a Nintendo console after all.

A brilliant, brutal survival horror dripping in atmosphere. Its from the oldest of schools, but still offers a rewarding challenge.