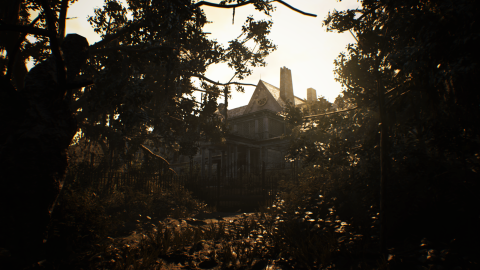 Not the dramatic reinvention I expected, but this is tense and refined survival horror with a brilliantly bleak, grimy atmosphere.

Ethan Winters drives deep into the Louisiana bayou to find his missing wife. We follow his car from above, a tiny speck against a vast expanse of remote, isolated swampland. The setting sun casts a gloomy orange glow over the landscape, giving you a creeping sense of foreboding. If you get lost or go missing—or worse—out here, who would ever know? It’s a beautiful, evocative shot, and almost certainly an homage to the Torrance family’s yellow car snaking through the Colorado mountains at the beginning of The Shining. But Resident Evil has always been inspired by horror cinema, even if recent entries in the series have been more Uwe Boll than Stanley Kubrick.

This understated opening immediately sets the tone for Resident Evil 7. It’s a return to the atmospheric, slow-burning horror of the original, with a few nods to contemporary games like Alien: Isolation and Amnesia. The shift to a first-person perspective might suggest it’s a bold reinvention of the series, in the same way Resident Evil 4 was, but it really isn’t. It’s classic Resident Evil through and through, with healing herbs, item boxes, elaborate puzzles, and shambling monsters. But the convoluted mythology, overripe melodrama, and absurd action set-pieces that plagued the last few games have been sidelined for something more subtle and refined.

To be fair, the first hour—before item management and weapons are introduced—is different to anything Capcom has ever done before. It’s a brilliantly paced, cleverly designed parade of scares set in a dilapidated old house. The fear of what lies around each darkened corner, and your inability to defend yourself, gives you a powerful feeling of tension and unease. It uses jump scares and psychological trickery to whittle away at your nerves, and it’s probably the scariest the series has ever been. But as soon as I had a 9mm pistol in my hand, and found myself juggling items in my inventory and using arcane objects to unlock doors, I felt right at home.

That’s not to say the game stops being scary the moment you find a gun. Not only is ammunition a near-constant luxury, but certain enemies can’t be killed at all, forcing you to sneak past them. You can attack them, and they disappear for a while, but they soak up so many bullets that it’s often a poor trade. You always feel vulnerable, even when you’re cradling a shotgun or grenade launcher, because you never know what the game’s going to throw at you next. One of its greatest strengths is keeping you on your toes and mischievously second-guessing you, throwing in a scare when you least expect it, resisting when the moment seems obvious.

Confidence comes in waves. You’ll find ammo and feel unstoppable. Then you’ll find yourself locked in a small room with an enemy, waste all your bullets by firing at it in a blind panic, and suddenly feel helpless again. However, there are a few moments, mostly in the last third of the game, where you have an abundance of ammunition and can merrily shoot any monstrosity that crosses your path. These sections almost feel like a reward for your many hours of careful ammo conservation and patient sneaking, and are hugely cathartic. But just as you’re delighting in your newfound power, it’s snatched away.

The early hours are spent in and around an old house owned by the reclusive Baker family. It’s a disgusting, rotten place—a far cry from the grand Spencer mansion—and rendered in astonishing detail. You can almost smell the mouldering food and stale, dusty air as you explore, and the building creaks and groans like a dying animal as it’s battered by the wind. There’s a grimy, almost tangible realism to the visuals, and the audio design is sensational too. You can easily track the shuffling footsteps of an enemy by ear, gauging where they are based on sound alone. And the creaking floorboards and sinister sounds that echo around you only add to the rumbling sense of dread felt in every room of this dreary homestead.

But you don’t spend the entire game in the house. There’s a surprising amount of variety here, and it never lingers on one location or situation for too long. Not once did I feel like the game was artificially extending its length with backtracking or filler—something even the best games in the series are guilty of. And during the nine hours it took me to finish it, it was constantly surprising me with new ideas, locations, and story revelations. I won’t go into specifics, because it’s a game that should be played blind, but there are some nice pace changes and shifts in rhythm that jolt you out of your comfort zone.

One of my favourite features, but one I wish they’d made more of, is the use of flashbacks. Find a VHS tape and slide it into a video player and you’ll relive events from the past. In one tape you’re part of a TV crew filming a low-budget paranormal investigation show in the Baker family’s guest house. These little standalone vignettes are wonderfully creepy, and I like how they sometimes reveal something that will help Ethan later on—like the location of a hidden switch. But there are only a handful of them to discover, and I feel like they should have been a much bigger part of the game.

The move to first-person is not as revolutionary as you might think. The combat, which largely involves taking careful aim at an enemy as they shamble towards you, is very Resident Evil. It’s no FPS, thankfully, and the game has a nasty habit of making enemies creep up behind you while you’re distracted by the one in front. But, curiously, there’s no lean button, which makes those moments when you’re trying to sneak around a hammer-wielding maniac slightly tricky. Some will miss the traditional third-person camera, but for me there’s something more intimate about seeing things through Ethan’s eyes.

For the most part, Resident Evil 7 is a successful exercise in modernising and reassessing a series that had become bloated and indulgent. But old habits die hard, and there are a few moments—especially the boss battles—that could easily be slotted into any of the old games. The careful, considered horror is occasionally nudged to one side as you find yourself fighting giant mutants covered in staring eyeballs, and you half expect Chris Redfield to show up and start punching rocks. But these lapses are infrequent, and do have some nostalgia value. Even though it’s the most self-serious Resident Evil yet, it still has a sense of humour. After solving another ludicrous puzzle to unlock a door, Ethan says “Who builds this shit?”

Even though it tries to distance itself, there are links to previous Resident Evil games. Some are subtle, like a newspaper article written by Outbreak’s Alyssa Ashcroft, and others are more overt. But it manages to avoid dining out on the series’ history too much, and is a fairly standalone story. Ethan’s search for his wife gives it a relatable, human underpinning—even when the story unravels towards the end and veers dangerously into B-movie territory. Resident Evil has always told big stories about toppling evil corporations, so it’s good to play as a character with a simpler, more grounded motivation for once.

Resident Evil 7 is a confident attempt at reinvention. But it’s the way it channels the older games, particularly the first, that really makes it great. It takes an industrial pressure washer to the series, blasting off years of accumulated filth and grime. And you’re left with a lean, polished survival horror that borrows from its legacy, but isn’t afraid to look to modern horror games for inspiration too. It loses something in the final act, and a few of the boss battles feel like a hangover from the bad old days, but otherwise this is comfortably the best Resident Evil in years.

Not the dramatic reinvention I expected, but this is tense and refined survival horror with a brilliantly bleak, grimy atmosphere.