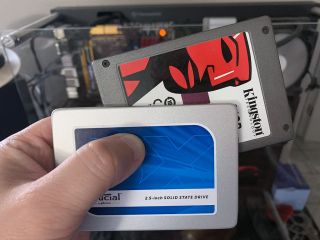 Like most of you, I'm looking forward to the continued decline in SSD pricing, though the NAND flash memory market can certainly be fickle. There are multiple reports that NAND pricing is about to go up, perhaps by as much as 40 percent.

That figure comes by way of a Digitimes report, which cites unnamed sources within the memory supply chain. As the story goes, memory makers anticipate pricing of non-volatile memory components (as found in SSDs) to rise by 40 percent by the fourth quarter of this year due to a combination of factors.

One of reasons mentioned is issues with supply, and incidentally, Reuters reported Samsung recently had to halt production of NAND and DRAM at one of its plants due to a power outage. The outage only lasted about a minute, but Samsung, the world's largest supplier of memory chips, anticipated a delay of two or three days to get its operations back up and running.

Samsung also suffered a similar power outage last year, which resulted in damages of around $43 million. It's not clear how this one compares, in terms of the financial impact.

Normally I don't put a whole lot of stock into unnamed sources, and the same goes here. However, it's not just Digitimes sounding the alarm. Market research firm TrendForce, a division of DRAMeXchange, is also predicting a rise in NAND flash memory pricing this year.

TrendForce is being much more conservative in its estimates, at least in the short term. It anticipates a 10 percent rise in the first quarter of 2020.

I reached out to TrendForce and asked what kind of price hike(s) it anticipates for consumer SSDs and how long this might last, and will update this article when I hear back.

In the meantime, I'm not hitting the panic button. As Trendforce notes, contract pricing on client SSDs has fallen for seven consecutive quarters (Crucial's P1 1TB NVMe, one of the best SSDs for gaming, is barely over $100 on Amazon). There's some wiggle room for prices to go up without feeling like we're getting ripped off, assuming any of this comes to pass in the first place.

That said, we've seen a lot of SSD deals lately. If you needed an extra nudge to pounce, well, here you go.