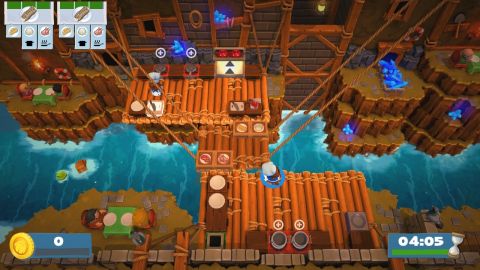 Busy friends list but short of local pals? This safe but solid sequel was made for you.

Like the original, Overcooked 2 is a cheerful, non-violent co-op game that’s simple enough for the whole family to enjoy. It also happens to be one of the most intensely stressful games you’ll ever play. This sequel adds a generous helping of new ingredients, but at its core it’s the same game: one that, for all its fantastical elements and willfully counter-intuitive working environments, captures the pressure-cooker tension of a busy restaurant kitchen. And it’s undoubtedly the only multiplayer game where you might hear one of your fellow players barking at you to “pass the sodding lettuce”.

As before, your goal—whether you’re playing alone, or with up to three other chefs—is to successfully serve as many dishes as you can within four minutes: chopping, mixing, frying and steaming ingredients according to the recipe. There’s a wider variety of orders this time, including sushi (chop fish, cook rice and add nori seaweed) and nuggets and fries (chop chicken and potatoes and deep fry) but the processes themselves are still very simple. Multi-tasking so you can fulfil as many orders as possible in good time—and boosting your tips to push you closer to that three-star total—is where it gets tricky. On top of that, you’ve got various stage hazards that force you to adapt your processes, and that’s when your careful planning really starts to fall apart.

One of the big changes this time is that you can now throw raw ingredients, whether they’re fresh from the pantry or just chopped. Often it’s simply a useful time-saver, but sometimes you’ve no other option: on one stage, your ‘kitchen’ is actually two rafts hurtling down a fast-flowing river, while another forces you to lob items back and forth between a pair of floating hot-air balloons. Elsewhere, a rotating partition can temporarily split you up from your sous chef, forcing them to pass over their half-completed dish so you can finish the job. It’s incredibly satisfying to find your range and lob a raw meat patty directly into the frying pan—or a tortilla directly into the hands of your partner to finish one last burrito order with a split-second to spare. In reality, you’re as likely to end up inadvertently chucking some chopped tomatoes away in your hurried confusion. That it’s mapped to the same button as ‘chop’ is a stroke of evil genius.

It’s a reminder that there’s a degree of awkwardness baked into Overcooked that can occasionally frustrate, but is ultimately the making of it. The interface is far from perfect: each dish is a mass of icons, sometimes obscuring whatever’s in the space immediately next to it. As such, it can be a struggle to tell when you’ve inadvertently taken a pan off a second too soon, or why it won’t let you put one ingredient on a plate with something else. But that’s the point. Kitchens are naturally cluttered, and you are always looking for a spare place to put things. If it was neater it wouldn’t be nearly as frantically funny: there would be fewer moments where you accidentally put a pan of fried meat in the sink, or absent-mindedly place a saucepan of rice in the wrong place and wonder where in heaven’s name the cheese has gone.

But much of this was true of the original, and Overcooked 2 doesn’t quite do enough to prevent it feeling more like an expansion than a sequel. Some of the level gimmicks are much better than others, too. An outstanding early stage starts you off in a balloon, which plummets from the skies and crashlands into a sushi kitchen mid-level, forcing you to adapt to a new layout and different recipes. By contrast, a haunted castle where spirits lift and carry a trio of chopping boards—refusing to let you grab them for several agonising seconds—is mostly just annoying. The same goes for a half-hearted addition to the level map, where you’ll sometimes need to roll over switches so you can climb a ramp to the next stage: an oddly pointless bit of busywork.

Online play, meanwhile, is ever-so-slightly underwhelming. The implementation is perfectly fine—public and private matches are available in both the standard Arcade and competitive Versus modes, letting the lobby vote from the six level themes. And it’s certainly far better than cooking on your own, manually swapping between two chefs to meet lower score targets.

But it’s not quite the same as when you’re sharing couch space and screen space with three others. Functionally it’s not much different with strangers, but Overcooked was made for good-natured bickering with people you know. As long as you’re cooking with friends, you’ll have a riotous time with a sequel that still offers one of the most deliciously chaotic multiplayer experiences on PC.

Busy friends list but short of local pals? This safe but solid sequel was made for you.