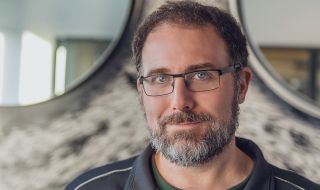 In December 2018 Mike Laidlaw announced that he'd joined Ubisoft Quebec, the studio behind Assassin's Creed Odyssey and For Honor, currently working on the light-hearted open world game Gods and Monsters. Now, just over a year later, he's leaving, wishing them "all the best of luck with future ventures including the upcoming Gods and Monsters."

Quick update from me! Today (Jan 31st) is my last day with Ubisoft. Huge thanks to the talented and welcoming folks at Ubisoft Quebec City for my time there.Now to take stock and figure out what’s next!January 31, 2020

Before joining Ubisoft Quebec, Laidlaw had been a creative director at BioWare for Dragon Age 2 and Inquisition, as well as lead writer on Jade Empire and a designer on the first Mass Effect. All in all he spent 14 years there.

Ubisoft recently responded to disappointing sales of The Division 2 and Ghost Recon Breakpoint by shaking up their editorial team and canceling a game that was under development at Ubisoft Montreal.