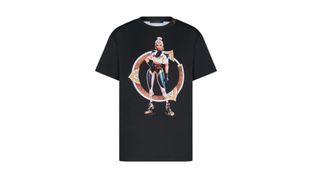 Tens of millions of people play League of Legends every single day, and almost none of them will be able to afford even a simple t-shirt from the game's new fashion range, created by Louis Vuitton. A simple black t-shirt with some character art, for instance, will set you back $865, and it's not even close to the most expensive item of clothing.

The collaboration is oddly extensive, with Louis Vuitton also designing a trophy case and several new skins. It's not the first brand I'd associate with a free-to-play MOBA predominantly played by young men, but I guess some of that tournament prize money could be spent on some overpriced gear.

Louis Vuitton's League of Legends range includes 13 'looks' made up of 47 items that can be bought separately. I confess that I do quite like the look of some of them, like this flashy leather biker jacket. It's also $7,250, so no thank you. Even this wee key holder and bag charm is $595.

Aside from the t-shirts with character art, none of the items are noticeably connected to League of Legends. Who is any of this for? Wealthy League of Legends fans who are willing to drop thousands on a bum bag but don't want anyone to know it's got anything to do with League of Legends? That's some niche.