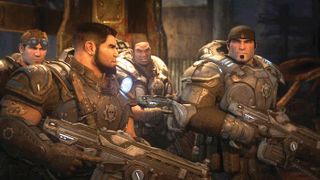 Hacking other players to pieces across maps set in rural Japan, you might see Hanako: Honor & Blade as just another multiplayer combat game. However, what creative director Matt Canei sees—and has infused into every aspect of the game—is a playable representation of his mother’s battle with cancer. The red forces of the Hanako clan represent his mother, and are depicted as possessing areas of cel-shaded beauty. The name ‘Hanako’ even means ‘flower child’, a reference to her love of gardening. Meanwhile, levels belonging to the green samurai of the Yamai clan represent disease and death. “It can be a bit rattling to take my pain and anger and transform it into a game world,” Canei says. “On the flip side, that is balanced by very beautiful scenes that brought me a lot of peace and closure as well.”

While the story behind the game Canei and company are building is touching, the fact that they’re including significant parts of their lives in the experiences they craft is not unique. When you look for personal references in games, it becomes clear that this practice is incredibly common—a critical, humanising, and often invisible factor in the creative process.

“Tim Ihrén was Tooth and Tail’s biggest fan, a moderator in our Discord community and our best player during our three-year closed alpha,” says Pocketwatch Games cofounder Andy Schatz. “His playstyle reflected what we considered the ideal experience of playing Tooth and Tail, so we balanced the game around him – when Tim was winning our community-run tournaments, we knew the game was balanced the way we wanted it to be.”

Unfortunately, Tim did not get see the game he helped shape release. “A few months before launch, he stopped showing up in our Discord, and two weeks before launch his family informed us that he had taken his own life,” Schatz tells me. “Launch was difficult for us, as we knew there was an empty spot in the leaderboards where Tim would have been.” Pocketwatch Games went on to recognise Tim through multiple in-game references, as well as the creation of a channel on their community Discord for members of the community to grieve.

Over on mobile platforms, the way games writer Jana Sloan van Geest (now a scriptwriter at Guerilla Games) approached a fairly mundane problem for Battlestar Galactica: Squadrons ended up reuniting a family. “When I was writing for BSG: Squadrons, Universal asked us to write lore for each of the ships in the fleet. Someone decided that each ship should have a named captain, but a lot of the captains of canon ships in the show were never named. That meant I had a lot of names to come up with. I named a few captains after my friends who are fans, and I sent an email to the team asking them to submit names for the rest,” says Sloan van Geest. “One of them named a captain after his late mother. He contacted me a few months later to tell me that his brother, with whom he had not spoken in some time, was playing the game, saw the tribute to their mother, and reached out to him.”

The thread linking these stories, regardless of genre, intent or platform, is that of connection. In the case of Kevin Cole, adding a tuba to his roguelike fantasy game made him feel closer to a man who meant a great deal to him already. “My latest game Haque is dedicated to my late uncle, Tom,” Cole says. “Tom is mentioned in the credits and through the tuba, an equippable in-game item. Tubas are weapons that project a blast of force and knock back all enemies. I had no idea my uncle even played the tuba until I talked to a former bandmate of Tom’s from college at his funeral. He said Tom loved the tuba at first sight because it was big, loud, and impossible to ignore.”

When I ask Kevin if there was more he wishes he could have done to recognise his uncle, his answer is simple. “I wanted to keep the dedication subtle. I remember my dad looking over my shoulder at one point as I was testing an alpha version of Haque. He saw the tuba effect and said, ‘Ha! Tom would have loved that.’ I had not told him that was my intent, and it felt right.” Kevin continues, “I think one of the scary things about losing someone close to you is the feeling that things have to be left where they are. I wish that I had spent more time with my uncle and known him a little better. Adding his memory to Haque was my way of continuing our relationship.”

Videogames are made by human beings, with full lives outside of their work. These Easter eggs, tributes, and dedications are just one way in which game developers intentionally use their commercial art form to touch those they love—both present and departed.

Honoured in plain sight: a few examples of devs honouring the people they care for.

Describing the game as a ‘fwooshy rogue-lite action flight simulator’, developer Kenny Backus added a dedication in the game’s credits to his grandfather, a flight instructor in World War 2.

Shooting a window after a co-op spotlight section in the original Gears of War will change the neon sign of a gas station to “Gab’s”—the name of lead level designer Lee Perry’s wife.

The storyline is inspired by one of director Bill Gardner’s ancestors, Susannah Martin. According to the credits, Martin was accused of witchcraft twice before being found guilty and hanged in 1692.

Designer James Youngman set the dates for discrete missions to match the birthdays of friends and family. He continues to add tributes to people he cares about in his work.