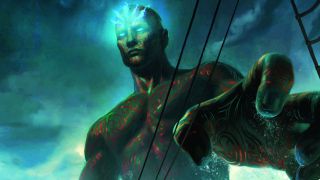 You might know this feeling. I'm enjoying a huge, meaty RPG, juggling sidequests and gathering my party to venture forth when, suddenly, I drift away. Perhaps it's work, or fatigue, or another game piques my interest. That RPG lingers in my library for months, its little launch icon glaring at me accusingly when I dip into a bit of Rocket League instead. Eventually I need to free up some hard drive space, so I hover over the uninstall prompt but think 'nah, I'll get back to that at some point'.

It's hard to pick an RPG back up again. There are so many fantasy names to remember, and a whole combat system to relearn. RPG developers try hard to give us ways back into the game. Detailed journals record our every move in each quest so we can refresh our memories. Tooltips in text dialogue refresh us on the fantasy lingo (oh 'Berath' is the god of death of course!). But often it isn't quite enough to ease me back into the great rhythm I had going at the very start of the game, when everything was new and exciting.

For me the biggest barrier to resuming up a fallow RPG happens just before I boot up the game. RPGs can seem exhausting. There's going to be so much reading and thinking to do, you know? Meanwhile One Finger Death Punch is just sitting there ready to deliver an instant rush of stick man ninja action free of kings, queens, and moral quandaries.

This year I'm determined to finish a proper big RPG. I have put 11 hours into Pillars of Eternity 2 so far this week, and I intend to see it through to the end. I have memorised the names of all the gods, and I've been reading all the tooltips and engaged with the history of the world. I'm still worried I won't make it.

There are particular moments in big RPGs when I tend to jump off. The first danger zone occurs after the prologue, which is usually a small island or town that teaches you the game. After this point the world tends to open up, the quest log starts to boil over, and it all starts to seem like work.

The other big danger zone is the introduction of a massive city. In cRPGs especially, big towns are something you have to crack slowly over many hours as you chat to NPCs, tune into the town's local dramas, and pull at those threads to unlock sidequests. RPGs demand effort. The more time you put in, the more secrets and cool swords you find. It pays to invest in the world as well. When you care about the warring fantasy factions and the big evil threat, the twists and turns of the story land better—everything seems more important and worthwhile. When that investment fades during a period of absence, it can be hard to spark it back up again.

That's why I'm implementing a rule. I might not feel like going back into Pillars of Eternity 2, due to the laziness I've described. I will make myself play for ten minutes, if I'm bored I can stop, but I have to give it a chance. I'm guessing after ten minutes of pootling around a city I'll already be engrossed. If I can repeat that, I might just make it to the end credits.

I'm pretty sure I'm not alone here. It might be laziness, it might be my shriveled millennial attention span, but something is stopping me from completing these awesome games.

So I turn to you for help. Do you too have loads of incomplete RPGs in your gaming library? Do you have any tips for sticking it out to the end? Should I just let go of those old RPGs and be free? Let me know in the comments below, or in our lovely shiny new forums.