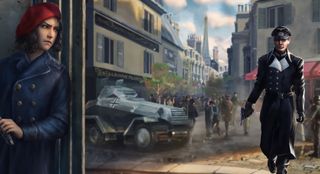 Announced back in October, Hearts of Iron 4: La Resistance steps away from the front lines and lets leaders create their own spy network or support the resistance in fighting off their conquerors. You can put on your oversized sunglasses and start pencilling in clandestine meetings soon, as it's due out in just a month.

Intelligence agencies can be created—with custom names and logos—to train your agents, after which they can be sent out on special operations or kept back at home to counter the enemy's espionage efforts. Agents can be trained in different skills, like information warfare, and they can use their skills to help allied resistance cells.

These cells spring up in conquered territory, including territory you've gobbled, and they can damage equipment and even cause an uprising, forcing you to fight new units in regular battles.

You can also crack codes to get a leg up on your opponent in battle, send recon units to get intel and even send your agents to turn enemies into collaborators, making the transition a lot smoother when you take over officially.

Beyond the spy shenanigans, there are more Focus Trees for France, letting you restore the French monarchy or go down the Vichy Regime or Free France paths. Portugal also gets a unique tree, and Portuguese leaders can choose to restore the country's naval power, strengthen its overseas empire or get stuck into the Spanish Civil War.

Speaking of the Civil War, the DLC will introduce a reworked Spanish campaign, with new focuses for both the Republicans and Nationalists. The Civil War will be larger, apparently, and can grow into a greater conflict.

La Resistance is available on Steam now and is due out on February 25.