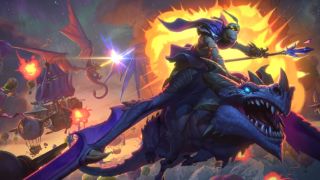 We noted when the Hearthstone expansion Descent of Dragons went live that it was widely considered one of the most overpowered sets to be released in years. It was almost inevitable that it would be so—Descent of Dragons is the third set to come out in 2019, so in order to impact the meta the designers tend to 'push' more over-tuned cards—but that sort of power injection always carries with it the risk of unforeseen consequences.

As it turns out, that's what happened: Almost immediately after the expansion went live, Blizzard began working on an update aimed at toning down the Galakrond Shaman deck, which within the first 24 hours had become, as Fraser put it, an "unstoppable, storm-summoning forces of nature."

Calls for changes following the release of a Hearthstone expansion are nothing new, but this will be the fastest Blizzard has ever actually nerfed cards in a new expansion, which reflects how badly it needed to be done. But don't take my word for it. Here's Hearthstone data analytics site HSReplay.net with the numbers:

As you can see, Shaman's dominance is total. Of the nine classes, it accounts for 41% of all games played, and is the only class with a positive winrate. According to our resident card slinger Tim Clark, there is a strong case for calling Galakrond Shaman the strongest deck the game has ever seen. The only thing holding it back from having an even higher win-rate is that it's mostly matching against itself.

Of the announced nerfs, Clark isn't convinced they're going to do enough. "I really expected a change to the card Dragon's Pack, which can summon 10/12 of stats with Taunt as early as turn five," he opined.

"I'm also surprised the amount of Rush in the deck hasn't been toned down. Was anyone actually asking for a Sludge Slurper nerf? That wouldn't make it into my top 20 cards that need to change. The other big surprise is that Rogue hasn't been touched at all. It has a card called Necrium Apothecary which can cheat out stuff worth a vast amount of Mana early in the game, and is swiftly becoming almost as much of an issue as Shaman is (though it arguably has more potential counterplay)."

If you do find that ladder remains an unpalatable experience, at least there's Battlegrounds to retreat to, which has also been tuned up a bit in this patch. The biggest change this time around is the removal of the Nightmare Amalgam minion: Minions rotate in and out of Battlegrounds regularly, but Nightmare Amalgam was a powerhouse because it has every tribal type, meaning every buff in the game works on it. That scalability, plus the fact it can receive Poison and Divine Shield, makes Nightmare Amalgam key to many of the best comps. Its removal should refresh the meta substantially.