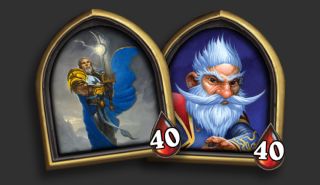 Two new heroes were added to Hearthstone Battlegrounds yesterday: Tirion Fordring, who seems pretty good, and Millhouse Manastorm, who seems kind of bad. That assessment could change as cleverer players discover tricks I've missed, but for now, I recommend avoiding Millhouse (unless you want to prove me wrong) and giving Tirion a try.

At first glance, Tirion's ability didn't sound great to me: Honorable Warband [1 mana] Give minions with no minion type +1/+1.

For comparison, Queen Wagtoggle can give a Mech, Demon, Murloc, and Beast +2 attack, and Pyramad gives a random minion +3 health, and neither of those heroes are ever my first pick. A +1/+1 gift for the few Battlegrounds minions with no type isn't immediately appealing.

But Tirion is interesting, because typeless minions aren't easy to buff normally. I haven't played him yet, but I've played against him, and he can be scary. Use his ability to buff Righteous Protector, Spawn of N'Zoth, and Wrath Weaver early on, and then Soul Juggler later in the game. Mix in the usual Demon friends, like Floating Watcher, and you have a potential winner.

I've had a chance to try Millhouse Manastorm for myself, and his ability is a tricky one to make work: Manastorm [Passive] Minions cost 2 Gold. Refresh costs 2 Gold. Start with 2 Gold.

The 1 Gold reduction for minion buys is nice for cycling Battlecry minions, but the extra Gold to refresh makes tiering up and completing synergies a struggle.

You can try this: Grab a minion which spawns another minion (a 'token' in the local parlance) on the first turn if you can, sell the token on turn two and tier up, buy two minions on turn three, two more on turn four, and then... hope it all pans out? If you don't get useful draws and can't build a powerful menagerie, you might have a bad time.

I ended in 4th place with Millhouse, but it was hard to call the Mech and Beast, and finally just Mech lineup part of a 'strategy' and not just a desperate struggle to keep up. But if you can adapt to what you get on each draw, you might make Millhouse work. See him in action in the video below:

Hearthstone's 16.2 patch makes other Battlegrounds changes. It adds two new Demon cards (see below), removes the Voidwalker card and hero Sir Finley Mrrgglton (who will eventually return with a new power, presumably one that isn't bad), adds your minion lineups to the bonus stats, and fixes some bugs. You can read the full patch notes here.

We'll add Tirion Fordring and Millhouse Manastorm to our Hearthstone Battlegrounds hero tier list once they've gotten more use and we can say for sure how strong they are or aren't. It's always possible that the Hearthstone meta brain trust could come up with something that makes me eat crow.