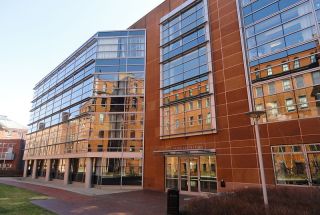 Scientists and chemists have been trying to turn hydrogen into metal for the past 80 years. Now they may have actually done it, or so a team of scientists at Harvard University claim. If this bit of modern-day alchemy proves true, it could dramatically alter virtually every field of technology, not the least of which is paving the way for computers that are exponentially faster than what are available today.

Lead researcher Professor Isaac Silvera, who along with Dr. Ranga Dias made the potential breakthrough, called this "the holy grail of high-pressure physics," Independent reports.

Scientists surmised in 1935 that hydrogen, the first element on the periodic table, could be turned to metal under immense pressure at low temperatures. That's no easy feat, which is why there have been numerous unsuccessful attempts for the past eight decades.

Dr. Silvera and his team accomplished the feat by putting a small amount of hydrogen between two tiny diamond anvils and cooling it to liquid form. The special contraption then applied more pressure than is found at the center of the Earth to crush the liquid hydrogen. The result is what they believe is a shiny metal.

The big deal for computers and technology in general is that metallic hydrogen is thought to be a superconductor, able to conduct electricity without any resistance and do it at room temperature. According to an MIT article on computer chips with superconducting circuits, they would be up to 100 times as energy-efficient as today's CPUs and run at several hundred GHz.

"That would be revolutionary," Dr. Silvera added. "As much as 15 percent of energy is lost to dissipation during transmission, so if you could make wires from this material and use them in the electrical grid, it could change that story."

Post-doctoral fellow Ranga Dias went on to add that a room temperature semiconductor could lead to magnetic levitation of high-speed trains and improved efficiency in electric vehicles.

Even rocket science and space exploration would benefit from such a breakthrough.

"That would easily allow you to explore the outer planets," Dr. Silvera said. "We would be able to put rockets into orbit with only one stage, versus two, and could send up larger payloads, so it could be very important."

Given the significance of the breakthrough and level of difficulty in achieving it, there is quite a bit of skepticism in the scientific community. A handful of experts told Nature they don't believe the claim, and that additional evidence is needed.

"I don't think the paper is convincing at all," Paul Loubeyre, a physicist at France's Atomic Energy Commission in Bruyères-le-Châtel, told Nature.

Skeptics doubt that Dr. Silvera and his team reached the level of pressure they claim because of the method they used.

"That is probably the weakest point in this paper," Reinhard Boehler, a high-pressure scientist at the Carnegie Institution for Science in Washington, D.C., and Oak Ridge National Laboratory in Tennessee, told The New York Times. "Literally there was a screw turned, and a pressure was estimated."

Time, repeat experiments, and peer review will ultimately tell if scientists have finally turned hydrogen into metal. If so, the next challenge would be seeing whether it's metastable, able to remain a solid even when pressure is removed. If it is, the next step is producing it in quantity. If it gets to that point, the computers of tomorrow would make today's systems look like the Speak and Spell toys of yesterday.