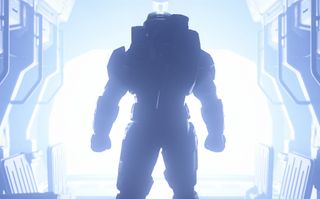 Halo Infinite creative director Tim Longo has left 343 Industries in what Kotaku described as a "leadership shakeup" at the studio that also includes a change in roles for executive producer Mary Olson. Longo himself had reportedly moved to a new position at 343 a few weeks ago.

Microsoft confirmed Longo's departure in a statement, saying that "roles and responsibilities of various team members regularly evolve to meet the needs of a game, throughout development."

"We have recently had two changes to the Halo Infinite development team. Our Executive Producer, Mary Olson will now take charge of the Campaign team on Halo Infinite as the Lead Producer, utilizing her many years of experience at 343 to help craft a great campaign for fans," Microsoft said.

"Additionally, Tim Longo has recently departed our team and we are truly thankful for his many contributions to our games, our studio and the Halo universe. We wish Tim nothing but the best in his future endeavors. The overall creative vision and production of the game remains led by Chris Lee, Studio Head of Halo Infinite."

Longo joined 343 Industries in 2013 and served as the creative director on Halo 5. Prior to that he filled the same role at LucasArts on the canceled FPS Star Wars: First Assault, and served as creative director on the 2013 Tomb Raider reboot at Crystal Dynamics. It's not known where Longo will go from here, but on August 7 he volunteered his services to help create a videogame called F#@cking Do Something, based on a quick gag made by talk show host Seth Meyers following the El Paso, Texas and Dayton, Ohio mass shootings.

@sethmeyers @LateNightSeth Veteran game developer here. I have the means and the skills to make this game for you/us as a country. Let’s do this! This is a serious and legitimate tweet.#fuckingdosomething #ElPasoStrong #MomsDemandAction #GunControlNow #VideogamesAreNotToBlame pic.twitter.com/mTV5KDFnKSAugust 7, 2019

It looks a bit like a joke in itself, but in a separate tweet Longo said he's stone serious. "Don't know what will come of this, but I've wanted to do activist gaming projects for quite awhile and Seth's satire on this just pushed me over the edge," he wrote. "We'll see how quickly I can [get] moving. Probably obvious, but this will be pro bono and proceeds to charity."

Halo: Infinite is currently expected to come out for the 2020 holiday season.