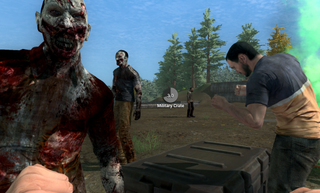 I'd hoped to have spent more time with H1Z1 by now, but the game's early-access alpha launch has been plagued with problems, beginning with repeated login issues for most of Thursday afternoon and continuing with server outages on Friday as Sony attempted to detect and fix their problems. While I've spent far more time trying to connect to their servers than actually playing on them, I did get in a couple solid H1Z1 sessions today, so here are some very early impressions.

Similarly to DayZ, you spawn into H1Z1 wearing jeans and a t-shirt and carrying only a flashlight and a couple of bandages. Not so similarly to DayZ, you almost immediately come into contact with other players, often spawning within a few feet of someone else. Within minutes of joining my first server I'd already punched a player to death, been punched to death by someone else, and chatted about the game with some of the less punchy types.

Zombies congregate around buildings and small towns but generally don't feel like much of a threat: you can easily outrun them or just lead them away from the area you're trying to loot. They do decent damage to you if you go punch-for-punch, and sometimes mobs of them form which can be dangerous if you're inside a building, but I didn't have much of an issue with them at all during my sessions.

Food and drink must be gathered, wounds must be attended to, supplies must be scrounged from abandoned buildings and vehicles, and you'll occasionally find a car that can be driven once it's been repaired with found items (though I never found any of those items). The inventory system is sensible and easy to come to grips with. There's a crafting pane for slapping together tools, bandages, campfires, and other items, and you have the ability to divine the crafting recipe for certain objects by examining them.

When you start a new character, it's tied to the server you created it on. This mostly makes sense—you don't want players gearing up on low-pop or private servers and then bringing all their loot onto other servers—but having to start a freshie every time you visit a new server, not to mention find a name for your new character that hasn't already been taken, is a bit of a nuisance and the reason why my latest character is named "arrrrgh4."

I've only done a little in the way of combat, mostly punching zombies and people, and it's a fun but sloppy routine of clicking the mouse as fast as you can and hoping you win. I've used a shotgun and bow and arrow a few times, but not enough to develop a real taste. Mostly, those weapons felt a little underwhelming.

There are a host of small but important details that are going to need addressing in the coming days. There's currently no way to custom map your control keys, meaning I'm stuck with using C to crouch (blech) and I couldn't get into third-person view because it's mapped to mouse-4, and while my mouse has a 4th button, the game doesn't seem to recognize it. (I've since read you can use the T key to switch views, though that's not shown on the controls menu.) I like part of the server menu: a green dot shows servers you've previously visited, and easy-to-recognize icons display the game modes that are active (PvE, PvP, first-person only, and so on) which is better than having to read through wordy server descriptions.

The rest of the server menu isn't so great. Instead of showing your ping in numbers it just shows you bars, and instead of seeing exactly how many players are on a current server, it describes the population as HIGH, VERY HIGH, MED, or LOW. What's more, I doubt the accuracy of those descriptions because even trying to join medium or low-pop servers I always find myself in a lengthy queue, watching my time to connection drop and sometimes, confusingly, even increase as I move ahead in line. Meanwhile, graphics options are almost nonexistent, and even with everything cranked up to ultra, the game isn't exactly pretty.

Let's talk about the airdrops, a premium item that's become a major point of contention between the developers and some of the players. It was said repeatedly that H1Z1 would never become "pay-to-win" by letting players purchase weapons, ammo, or food. Sony reversed their stance on this recently, and decided to include a random assortment of items in the airdrops, which can include weapons and ammo.

Airdrops are a fun idea. A player calls one in, and there's a wait (a minute or two) for a plane to pass overhead, then a longer wait (about three to four minutes) as a crate slowly floats down via parachute. During this time, other players will have heard the plane and seen the crate, and can rush over. The crate lands and explodes (for some reason) revealing a pack of zombies (for some other reason) and a military supply crate. Meanwhile, the drop zone emits a pillar of smoke that reaches the sky, visually alerting anyone who missed the sound of the plane. This creates a focal point for far-flung players as they now get to fight their way through the zeds and each other for whatever is inside the crate.

As we reported earlier, what's inside the crate is turning into a bit of a problem. In mine, I found a shotgun with 12 shells, a military backpack, a land mine, and two first-aid kits. It's true that any player can claim the loot: there was a big, fun battle over my first supply drop, during which I was killed and someone else got my gear. However, I called in my second drop after running through the woods to a remote area. This meant I had plenty of time to wait for the drop, lead the zombies away, and retrieve all the gear myself before anyone else even showed up. Once other players arrived, I took them out with my new shotgun. That definitely feels like a paid-for advantage.

It's a tricky issue. From a player standpoint, if there's not a good chance for awesome loot being in the airdrops, no one is going to call them in and no one is going gather to fight over them, and that big silly fight was the highlight of the game for me, so far. From Sony's standpoint, if there's not awesome loot, no one is going to pay for the ability to call them in. If there is awesome loot, people will do like I did and arrange for the drop to take place in a remote area, and get a pretty distinct advantage over people who don't want to spend money on their own airdrop keys.

I think the way to make airdrops work is if they're a random server event, or by tying them to an object, like a radio, that players can randomly find in the world. Thing is, that removes them as a premium money-making device for Sony. Since they're already offering refunds to people upset with the drops, I'd say they're probably going to stick with good paid-for loot in drops, and focus on making it harder for a single player to routinely walk away with it all.

Again, these are very early impressions of a very early alpha. I had a decent time playing on the rare occasions I could actually get on a server, but it's easy to see there's a lot of work to be done and some rather thorny issues to solve. H1Z1, which will eventually be free-to-play, is available on Steam early access for $20.