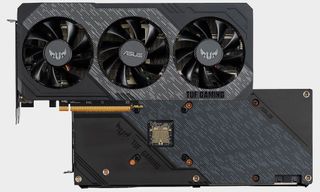 Struggling with choppy framerates and underwhelming performance from your aging GPU? It's time for an upgrade. You have plenty of options, one of them being the Radeon RX 5700 XT, which is one of the best graphics cards for the money. Incidentally, the two least expensive models are also factory overclocked variants.

Asus TUF Gaming X3 Radeon RX 5700 XT | $359.99 (save $60)
This factory overclocked card is a great option for playing games at 1080p and 1440p. It also qualifies for AMD's Raise the Game bundle, which is a nice perk on top of a tantalizing discount. Use promo code VGAPCJP837 for the full discount.
View Deal

In Gaming mode, this card has a 1,650MHz base clock and 1,905MHz boost clock, the former of which is 45MHz faster than reference. There is also an OC mode, which bumps the base clock to 1,730MHz and the boost clock to 1,980MHz, which amounts to a 125MHz base overclock and 75MHz boost overclock. A triple-fan cooling solution keeps those thermals in check.

The card also comes with a protective backplate and an overall snazzy design (particularly if you're suffering from RGB fatigue). As an added bonus, this card qualifies for AMD's Raise the Game bundle. You get Monster Hunter World: Iceborne Master Edition, Resident Evil 3, and three free months of Xbox Game Pass for PC.

The only other Radeon RX 5700 XT that is selling for this price is MSI's Evoke OC model.

MSI Radeon RX 5700 XT Evoke OC | $359.99 (save $50)
Another excellent deal for a Radeon RX 5700 XT, this factory overclocked model is a bit smaller and just as nimble as the Asus card. Use coupon code VGAPCMSPW26 for the full discount.
View Deal

This one qualifies for AMD's Raise the Game bundle as well.