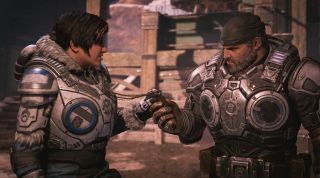 Gears 5 is already the most progressive game in the series. Granted, that’s a pretty low bar to vault over. The fact its campaign lets you play as former sidekick Kait rather than a balloon-armed, super roided man is already a step in a more inclusive direction.

The Coalition clearly wants to make all Gears players feel welcome, as it’s shown with the inclusion of a number of LGBT in-game flags. Something highlighted by Twitter user ‘akki!’

HEY GEARS HAS FUCKING PRIDE FLAGS IN GAME WHAT pic.twitter.com/vRhDSm3XzySeptember 5, 2019

There are 19 different Pride flags you can fly in Gears 5’s multiplayer modes. Among that number are banners for those who identify as gender fluid and polysexual.

For a game that’s so long been associated with dudes shaped like fridge freezers, it’s refreshing to see The Coalition go that extra mile to make gamers from all walks of life feel included. It's also nice to see the flags are freely available, and not cynically hidden behind a paywall.