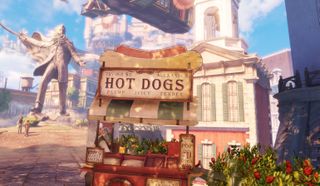 It's Food Week on PC Gamer, and we're looking at all the interesting ways games and grub intersect.

This month, I played and enjoyed Prey's Mooncrash DLC, where one of the game's objectives is to stash enough food and drink to escape in a supply crate headed for Earth. As I collected the items I needed, I was reminded that the developers put real effort into the types of food and drink found in the Prey universe. The packaging is beautiful. There's fun flavour text for each item. And damn, the food sounds fancy.

What would happen if you had to live on the supplies in places-gone-wrong like Talos I? Below, I rank five of gaming's most notable dystopias, using no criteria other than which consumables I personally find tasty, versus what's likely to make me projectile vomit. I also touch upon the drinks options in some of these worlds, because first-person games love to get you virtual drunk so they can make the screen blurry.

I feel like the food on Talos I says a lot about TranStar, the space station's owners: they have some serious cash, and if you're going to work in space for a private company that's this flush, then hot damn you should eat well. There's even a few decent veggie-friendly options in there, too, and the concept art above shows at some point they planned some crispy tofu bites too.

Impressive amounts of detail on even simple objects has become something of an Arkane hallmark—the packaging on these products (designed by artist Fred Augus) is beautiful, and effort was even put into bringing the food to life with flavour text. Here's how RanDom Dim Sum is described: "A bowl of randomly selected dim sum by TranStar Kitchens. Every bowl is different." I wish more of my food had the element of surprise.

The drinks options are strong, too, with beer, gin, wine and bourbon. Maybe I'd accidentally unleash a typhon infestation too if I was drunk off my ass. At least they have green tea and coffee for the inevitable hangover.

I wouldn't live in Columbia for a few reasons—mostly the beliefs of the citizens and leaders, but also the fear of wandering out of my house in a sleepy daze and accidentally falling to my death. The range of food you can pick up around the flying city is reasonably close to my existing (terrible) diet, however. I mean, I'd better pack my acid reflux tablets before moving there, but hey, I'd eat watermelon and pineapple for breakfast, cake for brunch, sandwiches for lunch then hot dogs and beans for dinner. Admittedly it's not great for veggie options based on this selection, but on the snacks front, Columbia is formidable.

I'm not sure where they get the sardines from, though. It must be a bit awkward to plan fishing expeditions when you're living above the clouds. Maybe the Luteces just open a portal to another universe's ocean, into which you can sling a fishing net, or perhaps a portal opens into a supermarket, where they load up on hot dogs and pickle jars before the store's baffled manager catches on to what's going on.

BioShock's Rapture just had creme-filled cakes, pep bars and potato chips, but by BioShock 2, it also had the extra two items above. Another factor that makes BioShock 2 the secret best BioShock game (maybe). Perhaps Sofia Lamb, Rapture's post-Ryan leader, just wanted a little more culinary variety in the underwater city? Or, maybe they just found a supply of potted meat and sardines in Andrew Ryan's office after he was beaten to death with a golf club. In Burial At Sea, at least, Rapture shares most of the same food with Columbia. Perhaps Suchong and Fink were trading snacks across universes.

It's worth saying, that where Rapture disappoints slightly with food consumables, it makes up for it in booze—no surprise given that the player just arrived after a NYE party. Alcohol is probably the only escape from the insufferable intellectuals who live in Rapture. Sometimes you just want to drink in a dystopia where the people have no self worth, you know?

You've got vodka, gin, absinthe, moonshine, beer, whiskey, brandy and two types of merlot across both games. Hot damn, that sounds like a night out. Let's party like it's 1959!

Pretty simple but practical foodstuffs. The item description for soy in Deus Ex: Invisible War makes the utilitarian nature of food 60 years from now extremely clear. "The complete snack! Engineered to provide maximum nutrition—not a single molecule wasted on added flavor or texture." Doesn't sound like the foodie future of my dreams, but hey, at least there's an option everyone can eat (if not enjoy).

Rewind a little, and the food consumables aren't much better in Human Revolution or Mankind Divided. Adam Jensen is a big fan of cereal and even has boxes of the stuff in his apartment (it's very pure), but you can't eat it in-game, which is a tiny shame. I could just imagine him sitting behind cover, using his cloaking augment while he tops up on Crunchy Pirate cereal.

Jensen's hoarding of cereal also produces a nice little Easter Egg early on in the game—see the video above. And check out these great fictional designs by artist Manuel Vallelunga from his blog. I particularly love the term 'suspiciously delicious!':

A mixed affair, really. In theory I'd eat an apricot tartlet in a second, but I'm less sold on the blood sausage and the hagfish eggs. And don't get me started on the rat skewers. I thought these things carried the plague? By the second game, however, you've got dried lizard and flatbread to choose from—stronger choices, to me, depending on how hungry I was. Like on Talos I, you've got jellied eels available, too, which is surely an Easter Egg to connect the game's universes.

I'm still not sure I could eat anything here, though. It's not that the food sounds bad in Dunwall—I just don't think I could enjoy eating knowing that I might be surrounded by rats or bloatflies at any time. I won't even eat crisps on the train in real life if someone's sneezed near me. Sorry, Dunwall. Sort out the infestation problem, and I might find the idea of munching down on some potted Dabokva whale meat a little more appetising (although probably not).