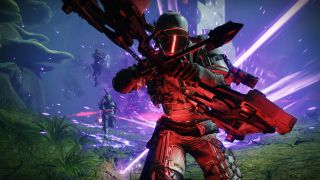 Destiny 2: Shadowkeep and New Light are coming on October 1, which will see major structural changes to the game, the kickoff of a new season—Season of the Undying—and a move to free-to-play for much of the game's older content. There's a lot going on, and to ensure everyone has a proper understanding of what exactly is happening, Bungie dropped a new "Shadowkeep and Season of the Undying Calendar" in the latest This Week at Bungie Update.

The new TWAB also reveals a ton of fine-tuning coming to weapons, which includes a conversion of weapon mods from consumables to reusable unlocks, which will enable players to be more experimental with different mods on different weapons.

Any mods you already have will automatically switch to an unlockable, unless your only copy of that mod is already in a weapon, in which case you'll need to find another one. Game director Luke Smith said earlier this week that Bungie is not currently working on "weapons 2.0," but that change in particular sounds very similar to the change to armor mods in the upcoming armor 2.0 overhaul.

Significant PvE buffs have been made to many weapon archetypes, and numerous exotics are also getting cranked up a bit. Interestingly, the Recluse SMG, which our resident pro (you know who I mean) says is the best gun in the game, hasn't been nerfed. As Bungie had previously promised, there are also no nerfs to grenade launchers—the current kings of DPS—though with changes coming to how auto-reload perks, that might not be a problem.

The list of buffs is long, so I advise taking a look yourself, but fans of scout rifles, snipers, and hand cannon users should all come away happy. There are also individual buffs to some of the guns underused exotic weapons. Sunshot will now have 12 shots in the clip, Graviton Lance will do a whopping 30% more damage in PvP, and Lumina's Noble Rounds should function more effectively when the patch goes live on 1 October, amongst other tweaks.

Also of note is an upcoming changing to Reckoning: On September 17, all negative modifiers will be removed from the mode. "This activity will continue to feature a weekly singe, with a daily rotation of Brawler, Grenadier, and Heavyweight," Bungie wrote. "Our goal in this change is to improve the replay-ability of Reckoning, so players will feel more inclined to hop in to matchmaking for some sweet loot. This should also help to address some feedback items from players that specific modifiers could feel too punishing (We’re looking at you, Blackout Darkblades)."

Update: As noted by Bungie community manager dmg04 on Reddit, Bungie has updated the post with some non-buff tweaks: Minor enemies (Rank-and-File) no longer take more precision damage than other enemies. Previously, they took twice as much damage to their precision hit locations as higher-rank enemies, but following the update precision damage will be entirely dependent on the weapon used, the same as it is for enemies of higher rank.