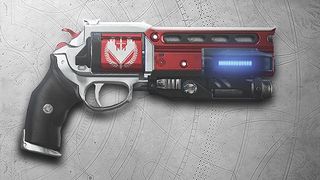 Superior PvP hand cannons Luna's Howl and Not Forgotten are facing significant changes in the upcoming Season of Opulence, which is sad news for players that completed the long, long grind to get them. In the this week's Bungie update the dev team announced plans to reduce the impact of the guns' unique perk, Magnificent Howl, and adjust their firing speed to 150 RPM, down from 180.

Bungie says "Magnificent Howl (the unique perk on these weapons) is too effective,"  It works in a neutral setting and rewards players for getting precision shots—something they would have done naturally. As a result, the time to kill of the game shifts to meet this new benchmark, and players feel that the majority of primary weapons in Destiny 2 cannot compete with these pinnacle weapons."

Some players have gone to great lengths to acquire these pinnacle weapons. Luna's Howl requires you to kill 450 opponents in Destiny 2's Competitive PvP mode, 100 with headshots, and you have to reach Fabled rank in Crucible. To get Not Forgotten you first have to to earn Luna's Howl, and then use it to kill a further 500 other players in Competitive. Even if you're a Crucible ace this takes ages.

"For some players, these weapons can represent a significant investment of time and the personal improvement needed to acquire them," Bungie says. "When tuning, we attempt to take into account the time commitment players make to acquire weapons and balance that against how those weapons affect the different game modes."

The changes aren't due until the Season of Opulence in the coming months, and the devs say they'll be watching the (occasionally quite angry) feedback on D2's forums. It's common for guns to have a period of dominance before being retired by a patch, which is why weapons like Thorn have such significance for Destiny players, but the huge grind attached to pinnacle weapons makes this one really sting. It's not just the raw power reduction, the RPM drop will alter how the guns feel to use. That almost seems worse.

Pinnacle PvP weapons put a key Destiny 2 dilemma into focus. How do you balance the interests of your hardcore players with everyone else? Pinnacle weapons sometimes entrench advantage by giving the most highly skilled players the best guns. The system fosters a stale meta and a dull PvP mode. Everyone gets sick of seeing the same old guns, and if ordinary players don't feel like they have a chance, you could end up with an empty Crucible.

Maybe unrefined chaos is the solution. Bungie has thrown balance out of the window and into a big bin this week with an Iron Banner/Revelry crossover event that enables Wolf's Favors, Iron Burdens, and the absurd Reveler's Tonic buffs at the same time. Guardians are chomping +100 power boosts and molting grenades in a rush to grab the Party Harder triumph and squeeze more guns and armour out of the time-limited event.

It's sort of fun, but only because you know it will end soon. After that everyone can resume the grind to their choice pinnacle gun, keenly aware that the weapon could fall out of favour in a future season and end up being something quite different.