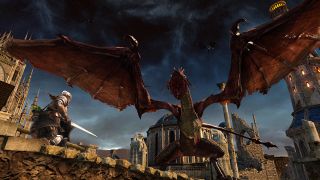 Whatever the first sin is, it probably isn't releasing an enhanced version of a game not long after its biggest fans have bought the original. That's a later sin. The fifth, maybe?

From Software will commit this act with Dark Souls 2: Scholar of the First Sin. It's an enhanced addition of the monster-biffing sequel that will bring better graphics, a new story, a new NPC, and new enemies and events. It will also include "additional exclusive enhancements," and come bundled with all three existing DLC add-ons.

As recompense for existing owners, From Software has also announced Dark Souls 2 patch 1.10. According to the press release, this patch will add: "an additional NPC to seek out along the treacherous quest through Drangleic as well as expanded story, in-game events, improved balance, and online matchmaking functionality."

Seemingly, however, the patch won't add all the enhancements of the re-release. On consoles that makes sense: the new version is aimed at PS4 and Xbox One, which are obviously more powerful than their predecessors. On PC, that's not the case, and both versions will exist on the same platform. It's an out-and-out better deal that only applies to those who weren't excited enough about Dark Souls 2 to buy it in the year of its release. Which is a weird way to treat your fans, really.

Dark Souls 2: Scholar of the First Sin is due out 3 April.