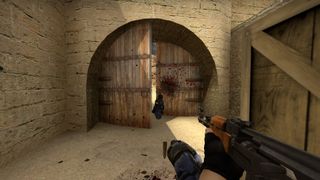 You can still play the original Counter-Strike on Steam, of course, but perhaps you want to play it with the greater graphical fidelity and technological advances of the more up-to-date CS:GO? If the thought appeals, know that you'll soon be able to mash together both games, via the recently announced Classic Offensive mod for GO. On Steam Greenlight now, Classic Offensive (formerly known as CS: Classic Offensive, until Valve had a word) aims to replicate the experience of Counter-Strike version 1.6 in CS:GO, effectively uniting these disparate worlds in a way that should probably incite angels to sing overhead.

The creators don't want to be VAC Banned, so they say they're unable to replicate the more mechanical parts of 1.6 in GO—however, you'll still be able to play using the classic map layouts, using a "more simplistic" art style, and without the guns introduced in GO. (Less sweeping changes including scope and price tweaks will be present as well.)

It's a nostalgia mod rather than a slavish recreation of 1.6, and if that sounds like something you'd be interested in, best keep an eye on its Greenlight page for future developments. Or, if you want to play it now, you can grab the beta version of Classic Offensive here.