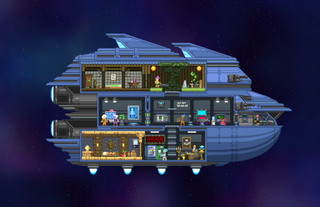 Chucklefish has issued a statement in response to multiple allegations that it exploited around a dozen volunteer contributors on the 2016 outer-space exploration game Starbound. The complaints came to light earlier this week when Damon Reece, who is credited as a writer on the game, said on Twitter that they worked "hundreds of hours" without pay on the game, which went on to sell more than 2.5 million copies less than a year after it went into full release.

Reece's allegations were supported by at least two others connected to the project: Rho Watson, a graphic artist who worked on Starbound, and Christine Crossley, a concept art who said the same thing. Composer Clark Powell also tweeted to say that they "almost did the audio and music" for Starbound until he was informed that it was an unpaid job.

i started out my gamedev career working on starbound for almost two years.i was sixteen.i worked hundreds of hours and wasn't paid a single cent for it while the company made unbelievable amounts of money off of my labour, and that of around a dozen other unpaid workers.August 28, 2019

"We're aware and saddened by the current allegations against Chucklefish regarding Starbound's early development," Chucklefish said in a statement. "During this time both the core crew and community contributors were collaborating via a chat room and dedicated their time for free. Community contributors were under no obligation to create content, work to deadlines or put in any particular number of hours. Everyone was credited or remunerated as per their agreement.

"It's been almost a decade since Starbound's development first began, and from then Chucklefish has grown considerably into an indie studio that has a strong emphasis on good working practices, providing a welcoming environment for all employees and freelancers. Our doors remain open to any related parties who wish to discuss their concerns with us directly."

Reece acknowledged signing a contract, saying that contributors were required to do so if they wanted to work on the game, and that they were further enticed with the promise of possible employment at Chucklefish in the future. They also refuted part of the studio's statement, saying that "deadlines were absolutely in place—if not formal, then definitely heavily implied."

"I was a naive newcomer to the industry and my trust was utterly betrayed. There is no moral defense for this," Reece said.

"Regardless of any contracts signed, it's massively unethical to allow workers to contribute huge amounts of content for no pay when you, the ostensible leader of the team, are walking away with millions of dollars in personal revenue share. If your game sells over two and a half million copies and your only excuse for not treating people ethically is, 'but the dozens of teenagers whose labor we exploited signed contracts,' you may need to do some soul-searching."

Watson, who founded indie studio Igloosoft earlier this year and is now working on an unannounced project, was a paid contractor on Starbound but said they're aware of at least a dozen others who signed contracts to contribute to the game without pay.

"Those who were passionate and wanted to help with the game that wasn't a paid member was given a standard 'contributor contract' and told it was 'industry standard'," they said. "Put simply, it was either sign that contract and get your foot in the door or get out. A few people were happy to donate their time or just wanted to see their work in the game, but for most people who wanted to work their way up to a paid position, they'd be forced to sign that contract and waive any right to compensation."

Chucklefish was founded in 2011 by Finn Brice, and has published a handful of notable indie games including Risk of Rain, Stardew Valley, and Timespinner. Starbound was its first in-house developed game; its second, the turn-based strategy game Wargroove, came out this year. Both Reece and Watson singled out Brice as the source of the pressure on volunteers to produce during Starbound's development: Watson described him as "a really smooth talker and excellent at making people assume the best and feel bad for requesting fair deal/compensation," but Reece went even further, saying that "shame is a powerful motivator and Finn Brice is highly adept at using it to manipulate people."