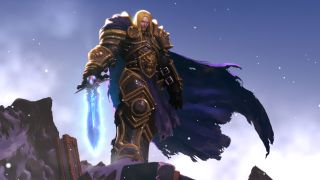 Warcraft 3: Reforged is taking a beating for several reasons, but the transgression that has the broadest implications is contained within one phrase. According to Blizzard's custom games policy, any Warcraft 3 maps you make are the "sole and exclusive property of Blizzard."

The Warcraft 3 Art Tools EULA gets grotesquely specific. If you use the software, it says you are giving Blizzard ownership of your "titles, computer code, themes, objects, characters, character names, stories, dialog, catch phrases, locations, concepts, artwork, animations, sounds, musical compositions, audio-visual effects, methods of operation, moral rights," and anything else you might create. Catch phrases!

This has been Blizzard's policy for years now—it went under the radar when it was applied to StarCraft 2 custom games—and in part, Blizzard is just protecting itself. If a character in a World of Warcraft expansion somewhat resembles a custom Warcraft 3 character in your mod, you don't get to claim that your material was stolen and demand payment. That's sensible, but if this policy were necessary to protect Blizzard from frivolous lawsuits, you'd expect every other publisher to claim ownership of maps and mods made with their tools. They don't.

Legal fine print that gives a publisher a non-exclusive license to distribute mods is common. If you create a mod with the Skyrim Creation Kit and distribute it, for example, you "grant to Bethesda Softworks the irrevocable, perpetual, royalty free, sublicensable right and license under all applicable copyrights and intellectual property rights laws to use, reproduce, modify, adapt, perform, display, distribute and otherwise exploit and/or dispose of" your mod however it sees fit. (Lawyers, eh?)

In short, you've given Bethesda license to do whatever it wants with your work. If Bethesda wanted to, it could package up your Skyrim mod and sell it as an official add-on without compensating you. (Not that Bethesda would likely do that, even if it reserves the right to.)

Non-exclusive licensing agreements can be found all over the place, and for the most part, they exist simply so that you can't upload something to Steam Workshop and then claim Valve is infringing on your copyright by hosting it. You've given Valve a non-exclusive license to everything you've uploaded by agreeing to the Steam Subscriber Agreement.

"Non-exclusive" is the important word here: It means that the parts of your mod that are wholly original—your original art, for example—are also yours to do with what you want. You can license them to someone else, or sell them on a shirt. The company you gave a non-exclusive license to can also do those things. You're sharing the rights to the work, in other words.

What makes Blizzard's EULA different is that it is claiming exclusive ownership of your work. That means that not only can it distribute your map until the end of time, it can theoretically prevent you from distributing it yourself, or from reusing any of the original work you put into it, whether that's for a mod for another game, a standalone game, or anything else.

Claiming ownership of your Warcraft 3 maps does simplify things: There's no need for Blizzard to explain every possible way in which it is free to use your work, because it's simply saying that your work is its work. It may also be hoping to avoid another Dota 2 situation.

In 2012, Blizzard went after Valve over its trademark filing for the name "Dota 2." Blizzard argued that the Warcraft 3 custom game Defense of the Ancients, also known as DotA, was associated exclusively with Warcraft and Blizzard, and that Valve had no right to trademark the acronym for a new game, especially because "Ancients" was a reference to Warcraft lore.

The companies settled the dispute out of court. Valve got to keep the name Dota 2 and Blizzard got—well, we're not sure. It got to use the full name, Defense of the Ancients, but agreed to change the name of Blizzard DOTA to Blizzard All-Stars, which later became Heroes of The Storm. Valve won, seemingly.

After the Dota 2 naming dispute, mods only became more influential and important. It didn't take much time for the battle royale craze to follow from the Minecraft Hunger Games mod and the Arma/DayZ battle royale mods, and it took even less time for Dota Auto Chess to lead to projects from Valve, Riot, Blizzard, and Epic.

It takes just weeks or months now for a mod to go from free project to ultra-valuable commodity, and if such a commodity originated as a mod for your game, it's useful to be able to claim ownership of its name, characters, and art as one weapon to pull out in a trademark or copyright dispute.

EULAs can be better

Other publishers also give themselves exclusive licenses to content made within their software. They don't often use blunt words like "property" or "own," but in legal speak, an exclusive license is essentially the same as ownership, because the word "exclusive" excludes even you, the creator. The Rockstar Games EULA, for instance, gives Rockstar an exclusive license to anything you create with its software.

Whether these dickish EULAs would hold up in all situations is uncertain, and they won't matter for most user-created content. Warcraft 3 maps typically stay within Warcraft 3 and make use of assets already owned by Blizzard, and it's not as if Rockstar is going around telling people they can't post GTA screenshots. But we still shouldn't accept them as standard fine print.

Valve, Bethesda, CD Projekt, and many others get by just fine granting themselves non-exclusive licenses to user-created work. The same is true of social media sites: When you post a tweet, you give Twitter a non-exclusive license to distribute that tweet however it wants forever, but you're also free to put that tweet in a book and publish it. It's still yours, even if you've agreed to let Twitter do what it wants with it.

What makes this more annoying is that game publishers have the upper hand regardless of the rights they reserve. They are free to take your Dota Auto Chess and make their Dota Underlords, Teamfight Tactics, or Hearthstone Battlegrounds, using their development resources to quickly profit off of your idea. Game design is the domain of patent law, not copyright or trademark law, which is why there can be so many games with similar rulesets without anyone's rights being infringed upon.

If it's going to profit from their ideas anyway, the least a company like Blizzard can do is let successful modders walk away with their title and original art—even if that means a competitor might get their hands on it. (That's what happened in the case of Valve and Dota Auto Chess: The standalone Auto Chess is available now on the Epic Games Store, while Valve created a derivative work, Dota Underlords.)

If Blizzard wants an exclusive license to the original elements of a modder's work, then it ought to strike a deal with that modder. It might be willing to do that, but it's hard to trust a company that says it doesn't have to.