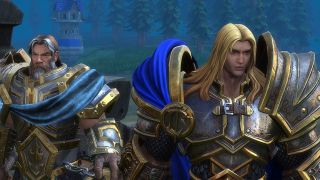 Warcraft 3: Reforged has not quite lived up to expectations. As we said in our 59% review, it's a great RTS, and a sub-par remaster; as Warcraft fans have said on Metacritic, it's the worst thing to happen ever. No matter where you find yourself on that scale, it's very clear that people aren't happy.

Blizzard acknowledged that discontent today in an update posted to the Warcraft 3 forums in which addressed some—but not all—player complaints, and shared as little bit about its plans for the game's future. A patch expected later this week will fix a bug that's causing colors and shading in Classic mode to look different from the original game, for instance, as well as some portrait animation issues, audio bugs, and UI fixes. Online features including leaderboards and clans, which impact all Warcraft 3 players, will be addressed in a more distant update.

"At BlizzCon we talked a lot about how the team is actively working on standing up the back-end to ensure a smooth transition to this new MMR system, much like we did with StarCraft: Remastered. As with Remastered, these and other features will be included in a major patch for Reforged, which will also address the issue for players of the original game," Blizzard said.

"We’ll share release plans as work progresses in the coming weeks—please be assured that the team is hard at work on standing these features up."

The update also touched on a number of "individual concerns" that Blizzard is not currently planning to take on, including the removal of the Reign of Chaos ruleset in mid-2019 (Blizzard anticipates that players who prefer that mode will be able to find custom games with similar rules) and, more significantly, the look of the cutscenes.

As we said in our review, "Blizzard showed off an in-game cutscene from the Culling of Stratholme mission, featuring lots of close ups and characters having a very animated argument, but little of that is present now. There are a few exceptions, but most cutscenes lack the emotion or cinematic flair of what we saw just over a year ago. The cinematic cutscenes that bookend the campaigns, meanwhile, are the exact same ones from the original game."

As you can see in this cutscene comparison made by IGN, what was teased in 2018 is very different from what was released in 2020:

Those 2018 cinematics were dropped because "we did not want the in-game cutscenes to steer too far from the original game," Blizzard said.

"We went a little deeper into the thought process behind that at the show, but the main takeaway is that the campaigns tell one of the classic stories in Warcraft history, and we want to preserve the true spirit of Warcraft 3 and allow players to relive these unforgettable moments as they were (albeit rebuilt with new animations and the higher fidelity art)."

Unsurprisingly, given the not-quite-apologetic tone of the message, the reaction in the comments isn't particularly positive. And with debacles like the Diablo Immortal announcement and Blitzchung suspension still fresh in mind, Blizzard is a little low on the goodwill that once would have enabled it to get by with "trust us" and six months of post-launch updates.

"We know this update doesn’t address all questions, but we’re committed to the development and support of this game," Blizzard said. "We hope you’ll keep an eye out for this week’s patch and future updates and let us know what you think as we continue fine-tuning things."