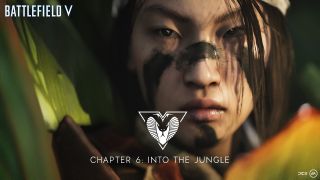 It's been a couple of years since the release of Battlefield 5, but the war rages on: Electronic Arts announced today that the sixth chapter of its Tides of War expansions, entitled Into the Jungle, will be revealed tomorrow.

The new chapter reveal will come roughly three months after the debut of War in the Pacific, which as Fraser mentioned at the time had a "doozy" of a trailer. Into the Jungle doesn't have a competing cinematic of its own yet, but it will continue to follow the war in the Pacific Theater, where the US and Japanese forces dominate the action.

But where chapter 5 was based on fast-and-furious amphibious assaults, images shared on Twitter and the currently-static YouTube channel (which is also embedded below) suggest that chapter 6 will move off the beaches and into the dense jungle of the Pacific islands, which will hopefully make for a very different type of fighting. (Also, the chapter is literally called "Into the Jungle.")

However the details shake out, Battlefield 5 is slowly but surely approaching its end. The free Tides of War updates that add new maps, modes, weapons, and other features also follow, very loosely, the historical course of the actual war, and with the focus now shifted from Europe to the Pacific, the end is presumably in sight. Maybe not imminent, though: EA recently said that the next full Battlefield game won't be out until mid-2021 at the soonest, and that for now, "we think there's an opportunity still inside the Battlefield 5 experience, as it was built as a base live service from the beginning."