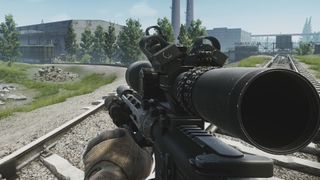 Modding guns in Escape From Tarkov is an almost spiritual experience. Where most online shooters might give you a choice of scope and muzzle attachment, Tarkov lets you customize every conceivable component. Gas tubes, barrels, receivers, side mounts, and optics can all be replaced to create your perfect angel of death, a weapon of war tailored to your every desire. The guns you are about to witness are not these guns.

Because with light, so must come darkness, and the freedom of Tarkov's overwhelmingly complicated gun modding lets you make some truly abhorrent monsters. These are just a few of my favorite guns, each one so weird it could be an Exotic weapon from Destiny 2. And if you dare follow in my footsteps, I've even created a shopping list for each one so you can easily recreate them.

"And God said, let there be light; and there was light. And God saw the light, and it was, like, really bright." — Excerpt from ancient religious text

You cannot kill that which you cannot see is probably the most fundamental truth of any shooter, but thankfully there's the Eye of Providence, a Colt M4A1 equipped with five flashlights that will let you peer into even the blackest abyss and bathe your enemies in radiant, scintillating light. And to make sure you can always get a bead on your foes, I have attached five separate optics: three reflex sights mounted on a Nightforce ATACR 7-35x56 scope, with a fifth T-1 reflex sight mounted at an angle along the handguard. Other notable features include a suppressor and drum magazine because reloading is for losers.

Below: All these gifs have sound, so be sure to turn it on when watching.

"Mama always said, dying was a part of life. I sure wish it wasn’t."

Any warrior worth his salt can kill regardless of the weapon, and Box of Chocolates is the gun that separates warriors from corpses. I have meticulously loaded its 20-round drum magazine with at least one of each different type of 12-gauge ammo, meaning you'll never know whether your next shot will unleash a devastating 12x70mm AP-20 slug or just some useless buckshot. But that shouldn't concern a true warrior like you. Along with the customary suppressor, Box of Chocolates also comes with a laser designator and dual flashlights—so you can guarantee your enemies will always be coming to you.

"A coward judges all he sees by what he is." - Unknown

Though you might think this a mere PM pistol modded with a sight mounted suppressor, the inverse is actually true: This is a suppressor modded with a pistol. Yes, the distinction matters. Legends say that eons ago mythical gunsmiths called the Alpha Dogs forged a suppressor with a weaver rail built on top of it so that warriors could mount optics on the suppressor itself. It was, naturally, branded as heresy and the Alpha Dogs were disembowled in front of The Autarch and his court. Most were of these profane suppressors were thought destroyed, but a few have apparently survived.

"If at first you don't succeed, try, try again."

This AKS-74U platform boasts four laser designators to ensure you can always get a bead on your target—which is good because you'll need all the help you can get the moment you pull the trigger. The AKS-74U already suffers from wild recoil, but without a stock this bad boy will kick harder than a mule, making it a challenge to kill even the closest target. To compensate, Bucking Bronco comes with an enormous 95-round drum mag, so you can spray and pray all day. The two optics, however, are a cruel joke by its designer: Both of them are obscured by the other and pretty much useless. Something tells me you won't need them anyway.

"Alone in the dark, even the smallest of creatures is terrifying."

The Lil' Prowler is a compact SMG boasting an expensive nightvision optic perfect for stalking your prey and gunning them down in the black of night. The 50-round drum mag is a necessity, though, since you'll need all the help you can get trying to shoot up close while looking down a 3.5x scope. If you manage to survive until dawn (you won't), Lil' Prowler even features a secondary reflex sight mounted on top of the nightvision scope.