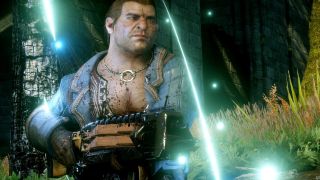 This article was originally published back in 2016, when we had to wait 42 weeks for more episodes of HBO's Game of Thrones. Luckily, we're now only 9 days away from the show coming back, so we thought it was the perfect time to republish.

This list compiles the best games to fill your Game of Thrones gap. I won’t include any actual Game of Thrones releases, because that’s cheating, and the Cyanide title is the Ser Dontos of games. Whether it’s grand adventure, political intrigue or the chance to make your actual, real-life friends despise you, there’s something on this list for every discerning Unsullied and Bookwalker.

You can sit on a throne! That’s a good start. There’s also political wrangling, an unstoppable evil and, um, dragons. The most Gamey Thrones element of all, however, is the ability to lean over a mighty battle map with a council of trusted advisors and decide on your next move. The lavish backstory, full of intrigue, conflict and distrust, makes Thedas a nourishing alternative to Westeros if you’re desperate for a hearty fantasy fix.

There are other Total War games that can be tweaked to make them more like Westeros—this mod for Medieval 2 is a great example—but Total War: Warhammer is a solid choice for out-of-the-box backstabbing. It’s high fantasy without the flouncing elves, and the vicious, filthy Warhammer world is a comparable to Westeros. If you’re playing as the Empire, uniting the factions with gentle threats and hopeful diplomacy makes you feel like an upstart king forcing great houses to bend the knee. And then there’s the Chaos horde, who feel like the bastard sons of Dothraki and White Walkers—an unstoppable, consuming horde, rolling down from the unexplored north.

Consider its superior sequel, too, which won our Best Strategy Game award in 2017.

It’s not an obvious choice, on account of it being set in space and having precisely shit all to do with swords or kings, but it’s the closest thing to the duplicitous bastardry of Game of Thrones. It offers an unusual degree of communication and intrigue, because you play it with real people; real people, who are all deceitful, terrible, attacking-you-while-you-sleep bastards. You’re encouraged to mislead, collude and, ultimately, betrayal. It destroys friendships, but it’s worth trying. There are few better tests of tactics and trickery

Crusader Kings 2 is a diplomatic masterpiece with all the dynastic weight of Thrones. It’s essentially a Tywin Lannister simulator. The only thing that matters is the success of your family, and you leverage any bastardy tool to this end. War, marriage and assassination are all used to cement yourself as the premier power of the age, and the success of your offspring is paramount. You make allegiances and fix marriages according to what’s best for the prestige and power of your faction. It’s a great idea in theory—just try not to think about Cersei Lannister and Robert Baratheon when you’re pairing off your sprogs. Great idea in theory, less so in practice. CK2 is a good GoT sim even before you install the immense Game of Thrones mod that recreates Westeros and all of its grumbling houses and heroes.

This would be on the list even without the giants and dragons. Skyrim is bold portrayal of a land in political turmoil, which shows the struggles of ordinary people under foreign occupation. There’s too much emphasis on destiny to be truly analogous to Thrones—George RR Martin hates that shit, and would have chopped off the Dragonborn’s head in the first five minutes—but the setting is ideal, and the sense of unease biting. If that’s not enough, there’s also an ambitious GoT overhaul, because Skyrim is the Rule 42 of the modding world: if it exists, there is a mod of it.

The Banner Saga is a great choice for anyone craving the emotional investment of Game of Thrones. Like the show, it’s about a selection of people rather than a lone hero, all of whom interact and grow as you progress. Giants aside, this is a rugged, realistic fantasy world, based more on viking history than haughty, orcs-and-swords fantasy. The most Thronesy thing of all, however, is that you have to live with the consequences of your failure—the strategy equivalent of the feeling you had seconds after Ned’s head got lopped off. It’s better than I’ve made it sound, promise.

The scope of Civ V obviously takes it far beyond the limited fantasy setting of Game of Thrones, but the central elements are similar. Imagine each faction is a family rather than a nation, and you’ll get the same, scrabbling sense of power and conflict. Diplomacy is deep and nuanced, allowing you to bluff and bludgeon your way to victory, and other world leaders can be as cunning and duplicitous as any Bolton or Frey. It’s Game of Thrones in theory, then, if only temporarily in setting.

Many games make this list because of their fantasy elements. Mount and Blade is the opposite. It’s a savage portrayal of medieval life which recalls the bleakest moments of Game of Thrones: expect mud, gore, poverty and death. The open-ended plot means you can roleplay as a sneering Lannister or poxed street urchin, so there’s loads of room for improvisation. There’s also a huge modding community, so you can tweak the game to provide the most accurate and depressing version of Westeros. Hurrah!

The Forgotten Realms setting of Baldur’s Gate is classic, AD&D high fantasy—it’s all gods, prophecies and destiny—but there’s still loads here to keep a Game of Thrones fan engaged. Plotting, betrayal and loss are all central aspects of the game, and the destabilizing iron shortage at the heart of the story is a tangible, believable way of adding context to a magical world. Play this, and you’ll never think about The Iron Throne in the same way again.

The Witcher 3 is the most obvious and necessary game on this list. The only caveat is that it’s so good it sometimes makes Game of Thrones feel dodderingly obvious. No game better portrays a land ravaged by war. Like Game of Thrones, everything feels like it existed before you arrived, and will continue to do so once you’ve left. For a genre cheapened by heroism and chivalry, The Witcher 3 provides a cynical, honest alternative, full of ambiguous characters and punishing twists. It even has Charles Dance's voice, which clearly makes it the best Game of Thrones-esque experience you can have on PC. Maybe one day we'll see a proper Game of Thrones game to match it.