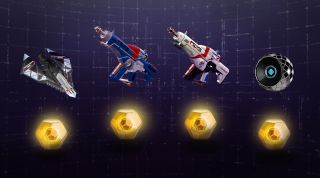 Destiny 2 players who are also Twitch Prime subscribers can now scoop up the first of six in-game reward bundles, each of which will offer four rewards including exotic weapons, Ghosts, ships, Sparrows, emotes, and weapon ornaments from previous seasons. The first bundle, available until February 25, includes the Suros Regime auto rifle and the Coup de Main ornament, the Skyline Flipside exotic Ghost Shell, and the unsecured/OUTCRY exotic ship.

(Yes, that's really what the ship is called. Speaking of which, have you tried our 'Destiny exotic or craft ale' quiz?)

It should be no surprise, given that this is a grind-based game, that this stuff isn't the latest or greatest Destiny 2 gear, but it's a good way for new players to catch up: The Suros is a solid auto rifle, and you can never have too many cosmetics. And because the weapon drops at your current gear level, it's useful even if it's a duplicate (which it probably is, if you're an experienced player) because you can use it to infuse other, lower-level weapons.

To claim the equipment, you'll need to have an active Twitch Prime subscription and, obviously, a Destiny 2 account. Make your claim here, then hop in the game and pay a visit to Amanda Holliday in the Tower's hangar. As long as you make the claim through Twitch before the deadline—February 25 for the first drop—the equipment will be in her inventory, waiting to be picked up.

If you're not a Twitch Prime subscriber but want the stuff anyway, you can take advantage of the 30-day free trial to get one of the drops. You'll keep whatever comes out of it, but you'll have to subscribe to get any subsequent drops. Twitch Prime is included with Amazon Prime, which goes for $13 per month or $120 per year, and offers rewards including free games and in-game loot every month: Right now subscribers are also eligible for drops in games including Rainbow Six Siege, Apex Legends, and Borderlands 3.