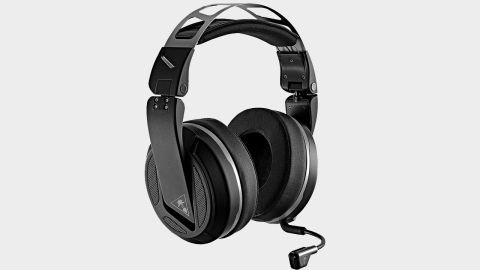 An affordable, slick headset with numerous customisation options make this the top choice for competitive gamers.

Turtle Beach is a household name when it comes to gaming headsets, offering reasonable quality devices that range from the cheap end of the scale to the mid-range. The Elite Atlas Aero falls somewhere in the middle of these two, coming in at $120/£130, but what does it offer compared to other gaming headsets at the same price? And where does it really fit in with all the other Turtle Beach offerings from the past couple of years? It’s not the cheapest, nor the most expensive, nor the most feature-packed.

Initial impressions of the Turtle Beach Elite Atlas Aero are strong; the headset is packaged in its folded state, which is ideal for portability. One earcup completely folds into the other, so you don’t have a huge bulky pair of cans to transport. One big complaint I had though was the size of the headband itself; I don’t have a particularly large head but had to extend the headband to almost the full length and, even then, the headset feels tight when worn for lengthy periods. If you’re someone who typically has a big noggin, bear this in mind because the device might not physically fit comfortably.

Setting up the headset isn’t particularly difficult. It comes with a USB bluetooth transmitter, which connects without problem thanks to the easy-to-follow instructions, but unfortunately it’s only compatible with PC. Mac and Linux users are short-changed here, because the Turtle Beach Control Studio is a Windows-only application, and this is where the Turtle Beach Elite Atlas Aero seriously shines. Hardly an issue for PC gamers, but anyone looking to use it across multiple devices is a little short-changed.

The amount of customisation options available is staggering, from simple sliders like increasing the bass and treble to a preset mode dedicated to increasing footstep sounds, the Control Studio has it all. You can create your own presets here too by fiddling with the equaliser for individual sounds like car explosions, wind, vocals, and more. There are also macros to assign to specific functions so you can switch between audio modes at the press of a key, and you can import other people’s optimal settings for the specific game you’re playing.

Perhaps the most impressive part of the Elite Atlas Aero is the “Superhuman Hearing” button. This toggle activates the audio mode of the same name, which means you can hear footsteps and enemy noises from a serious distance away. I’ve played a lot of Apex Legends, Call of Duty: Modern Warfare, and Rainbow Six Siege with it over the last month and the range in that mode is on another level. I’m confident in saying I’ve not heard such game enhancing audio from a headset before in my life, because it gives an incredible advantage. The general audio quality drops, but that’s to be expected. Having the single button on the underside of the left earcup means you can turn it on whenever and start detecting enemies from miles away, while they’re completely unaware.

In the same location is where you’ll find the on/off switch, along with the volume and separate mic monitoring dials (adjust the volume of your own voice for others). The only complaint I’ve got is that thanks to the position of the volume wheel on almost the exact rear of the cup, if you have a tall seat such as a traditional gaming chair, it’s easy to accidentally raise or lower the volume when you lean back by brushing the dial against the back of your chair.

When it comes to the microphone, the Elite Atlas Aero does drop a mark here for two reasons; firstly, the quality isn’t excellent. It’s not bad per se, but I’ve both heard and used better from a wireless mic, like in Sennheiser’s gaming range. It’s also impressively fiddly to plug in the detachable microphone. You have to get the exact rotation before pushing it in quite forcefully, to the point where I wasn’t sure if my attempts were futile. It’s a seriously tricky mic to plug in, which begs the question, why wasn’t this spotted in quality control? Thankfully, as someone who mainly uses a better quality external USB mic, this only affected me for testing purposes and before long I stopped using it again. It’s something to bear in mind though if you don’t have a separate mic to use, because it can cause some issues.

The Turtle Beach Elite Atlas Aero product page claims the headset boasts “over 30 hours of battery life” when fully charged, and from my experience that isn’t true whatsoever. The battery life certainly isn’t bad, but if you spend a long 12 hour session using them talking on Discord and enabling the Superhuman Hearing function, you’re going to want to charge them overnight. You’ll be sorely disappointed when they die swiftly the next day if not. Our tests place it between 12-15 hours of normal gaming use.

If you’re not too concerned about the actual quality and instead want an advantage over your opponents in competitive multiplayer games where sound plays a vital role, you won’t find a better headset than the Turtle Beach Elite Atlas Aero. It has serious value-for-money and is one of, if not the best PC headset I’ve used in that regard. There are a few minor drawbacks, but this should be your top choice if you want to rank up online.

An affordable, slick headset with numerous customisation options make this the top choice for competitive gamers.