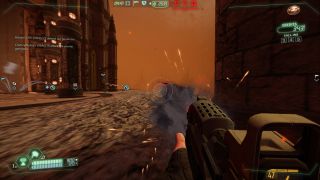 I think I might start playing Sentinel again in Tribes. Though I was courted away from the sniper class by the speed and glory of the flag-capping Pathfinder, yesterday's Marksman update is wooing me. The patch gives Sentinels the SAP20, a more powerful Phase Rifle variant, a secondary shotgun, and speed-activated mines. I could be in the minority, but I quite like all of them.

The SAP20 rifle sucks up more energy than the original Phase Rifle, but does more max damage than either the Phase or BTX1 rifles. Since I always preferred the BTX1, I'm not used to the Energy constraint, but the power is worth it. I switched my perks to Ultra Capacitor I and II for my new build to compensate.

The Accurized Shotgun deals less damage than the Pathfinder's shotty, but its tightened spread makes it effective at longer ranges. It requires a lot of precision amid the jet-powered close-quarters skirmishes, but it's effective enough that I make a comfortable living chasing slower-moving mammals as they try to trundle off with the flag. Its range keeps surprising me, and I'm a fan even though it may not be objectively better than the Sentinel's other secondaries.

The new Motion Mines pull off a cute trick, only detonating under targets traveling over 120KPH. Experienced flag-cappers are pretty good at clearing the flag stand with their Spinfusor, but the speed traps at least slightly increase the odds of scoring a useful hit - no more big guys stomping all over my stuff. They're also harder to spot than Claymores.

I don't know if this new build will keep me locked into a scope forever, but it's at least renewed my interest for now. And that's all I'll say about it, because I'm probably one of the few talking about the marksman-related updates in the Marksman update.

No, everyone is talking about the Pathfinder's new Blinksfusor and its 100% inheritance. That means that, unlike all other Spinfusor variants, its projectiles inherit 100% of the user's velocity when fired. The others only inherit 50%, giving them an odd, but classic drag which can take a while for new players to get used to. But, of course, now that we're all used to it (and were before Tribes: Ascend), the addition of the Blinksfusor has some baffled. Others see it as more logical than regular spinfusors (yeah, it sort of is), while others yet say, "Eh, whatever. I guess you could use it if you want." I'm with that camp. It felt weird for a bit, but didn't have a noticeable effect on my accuracy. I won't use it.

Also notable is an update to the Rage perk. Rage actives when a flag grab occurs near the player, briefly increasing Energy and reducing player mass to jump-start the chase. With this update, the Rage effect makes players immune to their first self-inflicted damage after it activates, though self-harm also removes the effect. It was a much asked-for adjustment.

There are tons of other tweaks, nerfs, knob-twists, and so on, so have a look at the complete patch notes .