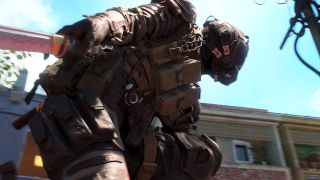 Call of Duty: Black Ops 4 had a difficult development period, one that ended up discarding an experimental campaign mode, and then adding in its Blackout battle royale mode less than a year prior to release. And according to a new report by Kotaku, that led to about a year's worth of crunch, with QA contractors working long hours for low wages.

Kotaku interviewed 11 current and former Treyarch staffers, who spoke on the condition of anonymity in order to protect their jobs. While crunch is still a common phenomenon in the games industry, crunching for a full year is extreme, and QA testers said they often felt as though they were treated as inferior to full-time Treyarch employees.

One said the company routinely turned the air conditioning in the building off as the night shift came to cover their 12 hours, leading to 90F degree (about 32 degrees Celsius) temperatures in the second-floor Santa Monica offices where they worked.

"A couple of jokes were made about sweatshops and all that, but it's terrifying, because it kind of was sometimes, especially in the dead of July," one tester said.

Kotaku reached out to Activision for a response, but it declined to comment on the specific matters raised in the story. Instead, it sent a general statement that praises the talent of all the people who worked on Black Ops 4 and says it's committed to making everyone who works on its games feel appreciated and respected.

"We constantly strive to provide a rewarding time and fun development environment for everyone," it said.

Crunch conditions persisted at Treyarch almost for the entirety of 2018, and continued after Black Ops 4 launched, the employees said. That in turn led to more bugs in the post-release builds they pushed out, as testers didn't have enough time to find and flag important problems.

"I think the majority of us just want to be treated equally," one said. "All of us give a shit about this game … Why treat us like subhuman even though we work just as hard as you guys?"

The conditions described in the report unfortunately aren't uncommon at major game studios: Similar stories have emerged from studios including CD Projekt Red, Epic Games, BioWare, and NetherRealm. But the Treyarch situation feels especially egregious because of the efforts to isolate QA workers from full-time employees. Crunch is bad enough, but telling contract workers that they're not allowed to touch catered lunches until an hour after other developers have picked them over seems both pointless and cruel.

Following the publication of the report, studio heads Dan Bunting and Mark Lamia sent an email to Treyarch staff, which was acquired by Kotaku. Referencing the story, Bunting and Lamia said they "take the well-being of every single individual working here very seriously," and "have a vision for the future of this studio that includes significant improvements to work/life balance."

"We plan to achieve that through better project planning, streamlined production processes, and rigorous decision-making timelines. It is also our intention to maintain our commitment to increased transparency," they wrote.

"Getting there will require time, hard work, and commitment—most of all, it will require open communication. If you ever feel like your needs aren’t being met, please do not hesitate to communicate actively with your manager. No one should ever feel like they don’t have options, can’t talk openly, or that the only choice is to take their concerns to the public. These conversations should always start with an honest dialogue with your department manager, and if that’s not working, feel free to reach out to one of us."

According to Kotaku's Jason Schreier, the author of the report, the email was sent to everyone at Treyarch, including contract workers in the QA department.