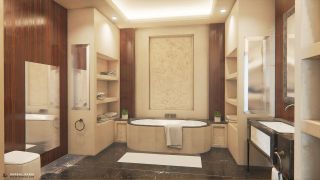 Great graphics do not necessarily make for a great game, but they do make for an awfully impressive virtual tour through a beautiful Parisian apartment. Like this one, for instance, created by Benoit Dereau, a "CG generalist and level designer," who said it's his first work in the Unreal Engine 4.

Obviously we're still a bit away from playing 60 FPS games at this level of visual fidelity, and Dereau said on the Polycount forums that "optimization was not the center of my work with this scene." But the texture quality, reflective surfaces, and lighting effects are spectacular, and even more remarkable is that it can all be generated with a standard-spec PC and a low-cost engine.

The actual demo isn't currently available; Dereau had released it but took it down earlier today to fix some bugs. An updated build is expected to be available tomorrow at BenoitDereau.com. Thanks, NeoGAF.