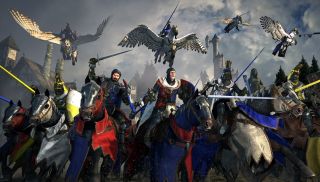 Creative Assembly has announced that the colorful human kingdom of Bretonnia will be a playable faction in custom and multplayer battles in the upcoming dark fantasy strategy game Total War: Warhammer.

The Bretonnians rely heavily on powerful armored units and overwhelming charges in battles, the studio said, backed by heavy trebuchet artillery and masses of archers. Think medieval France, essentially. They don't bring much to the table in the way of massive monsters, but their Enchantresses can unleash powerful offensive magic as well as buffs that greatly fortify the abilities of their knights.

Interestingly, it was almost exactly one year ago that we mentioned the absence of the Bretonnians, who “seem to have fallen out of favor with Games Workshop these days,” in our breakdown of the Total War: Warhammer factions. They haven't been totally absent from the action, however: They're also a playable faction in the fantasy sports sim Blood Bowl 2.

To demonstrate how the Bretonnians will play, Creative Assembly posted a 25-minute gameplay video pitting them against a Vampiric invasion of the city of Couronne. I won't tell you who wins, but it looks pretty fantastic. Total War: Warhammer comes out on May 24.