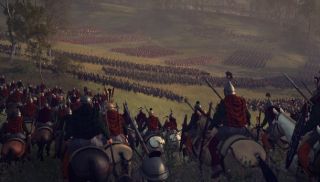 If nothing else, you've got to admire the Roman work ethic. Want to be adored by the people? Start a war. Want to relieve the boredom of politics? Start a long war. Want to get more glory than a rival? Start a war before them. As shown by this launch trailer for Total War: Rome 2's now available Caesar in Gaul expansion, the new campaign you'll be fighting through is largely being fought because Rome really wanted some more war.

That war is being waged on an expanded map of Gaul and southern Britannia, over a shorter period of time than the main campaign. That leads to a greater focus on the details - with 24 turns per year ensuring seasonal changes can affect your plans.

As for the base game, Creative Assembly continue to release patches in an effort to fix Rome 2's launch problems. The most recent update continues to tweak features and fix usability problems, and the upcoming 8.1 release will focus on AI behaviour.