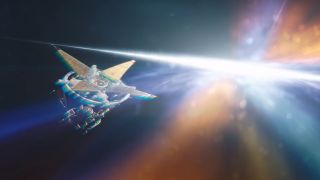 Bethesda made two very big announcements at E3 last year: One for Starfield and the other for The Elder Scrolls 6. Unfortunately, that's literally all they were, just acknowledgments of their existence accompanied by nebulous teasers and a hearty, 'Thank you, good night!" Earlier this year Bethesda Game Studios executive producer Todd Howard said that neither game would appear at this year's E3, and in a recent, very in-depth interview with IGN he said that fans eager for Starfield should be patient—and those waiting for the next Elder Scrolls should be very patient.

"I think everyone should be very patient," Howard said when the interviewer points out that it could be a full decade wait between the last Elder Scrolls game, Skyrim, and the next one.

"The gap in between is going to be long, It already is. On one hand, I think it's good to miss things. I think that makes people come to it with really, really fresh eyes, and I think when they eventually—eventually—see the game and what we have in mind, they'll understand the gap more in terms of technology and what we want it to do."

One of the reasons Bethesda is willing to let that gap grow—and gets away with it—is The Elder Scrolls Online, which is "hugely popular" and keeping fans invested in the series. But it also maintains a presence on the single-player side of the coin with The Elder Scrolls 5: Skyrim, which he said is still "one of the best selling games." The Skyrim Special Edition is currently in position 32 on Steam's top 100, with a peak concurrent player count for the day of 14,662; surprisingly, the original Skyrim is close behind, in position 42, with a daily peak of 11,722 players.

"Anything we put it out on, it becomes a hit game. And they love it, they still play it, it's almost infinitely playable, with all of the mods and everything like that," Howard said. "So what that does—and we're eight years post-Skyrim—it lets us know going into Elder Scrolls 6, this is a game we need to design that people will play for a decade at least. At least."

When Elder Scrolls 6 does kick into gear, it will be a huge project—"Every BGS studio will probably be involved," Howard said—but for now, he made it clear that Starfield is the game Bethesda wants to make, and that's where its focus is—entirely.

"We're creatives, and it's like, we have to make this game, and this is the time, and so Elder Scrolls 6 is going to have to wait a little bit. And again, Elder Scrolls Online is doing so well, it's so vibrant, that this is the time [for Starfield], both for us creatively, and our audience."

Bethesda's E3 2019 press event will take place at 5:30 pm PT/8:30 pm ET on June 9. The full schedule of all major publisher press conferences is available here. And in case you missed them, the (incredibly brief and uninformative) Starfield and TES6 teasers area below.