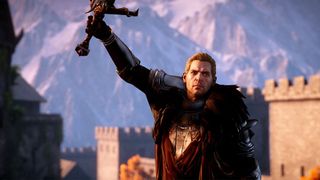 The authority on videogame art, design and play, Edge is the must-have companion for game industry professionals, aspiring game-makers and super-committed hobbyists. You can subscribe to both the print or digital editions here. Edge 319 features Dark Souls Remastered on the cover and you can pick it up now.

Welcome to the second guest article from Edge on PC Gamer, where we'll occasionally feature PC gaming-related articles from the long-running magazine's recent history. This was originally published in Edge 314 in December 2017, and is republished here with the Edge team's permission.

Running a country is, we’re sure, a messy, awkward business and so, much of the time, is Dragon Age: Inquisition. Consider Skyhold, the game’s gradually restored mountaintop fortress that is the most obvious manifestation of your power as Inquisitor, but which often inspires a sense of helplessness, with companions, crafting stations, merchants, furnaces, wardrobes and gardens scattered throughout its courtyards and battlements. A hundred hours into the game, it is still possible to get lost while walking around your own seat of government – confusing the door to your quarters with the one to the war room, for example, or the stair to the great hall balcony with the one to your aviary. The perks of lording it over Skyhold aren’t a huge departure from commanding the Normandy in the Mass Effect series, but Inquisition drags out the distances and piles on the pomp. If you want to acquire new armour before setting out on a mission, you’ll need to dismiss your advisors and slog back down the hall to the undercroft, then call another meeting at your war table. There is, perhaps, an object lesson here about the narcissism of tyranny, about being engulfed by the trappings of megalomania.

Next to the imposing scale and liveliness of this space, with its laden banquet tables and multitude of cobwebbed, candelit nooks and crannies, the Inquisitor her or himself is quite the non-entity. This is often true of BioWare’s ‘blank tablet’ protagonists, each stretched thin by the demands of morality gauges and multiple-choice dialogue systems, and in this case, there’s a little more method to the blandness. Your character is appointed Inquisitor, an ancient role invoked during times of crisis, following a cataclysm which at once helpfully kills off the realm’s previous spiritual head, wipes your memory and endows you with a unique mark that can be used to seal portals to the Fade, Dragon Age’s parallel magical dimension. As far as Chosen One CVs go they don’t come much more by the numbers, but Inquisition turns this anodyne framework into a strength by, in essence, making you the mirror for an entire society.

Rulers exist to an extent in the eye of the beholder, and in Dragon Age’s complex multiracial universe, the Inquisitor is an inspiration to some and a blight to others – a tyrant, a bulwark, a money-making opportunity, a heretic, a sex object and countless things besides. The thrill of exploring this world, with its oddly Francophone courts, oppressed mage circles, paranoid knightly orders and brutalised elven enclaves, is drawing out its many different interpretations of who you are. Or at least, should be. The Mass Effect series conjures up a similar play of your preconceptions, but Inquisition’s universe has a rather more involved history, its conversations arising from a thick mulch of ballads, scripture, family trees, race mythologies and clashing accounts of certain famous events, including those of previous games. All this endows even minor cosmetic choices, such as deciding which nation’s drapes to hang in the throne room, with unexpected dramatic force, and stops you from losing interest as you tour environments that occasionally threaten to devolve into mountains of busywork.

Similar things can be said of Inquisition’s main questline, which sees you racing to stop a demon warlord re-entering the Fade and so bringing about the end of the world. As with much of BioWare’s output, this banal tale’s redeeming virtue is that it creates a charged atmosphere in which smaller and more evocative incidents can play out – companion character arcs, the resolution of long-held grievances between factions such as mages and templars, the discovery of lost loved ones and the revelation of forgotten disasters.

It also benefits from the maturation of BioWare’s dialogue writing, which is less reliant here on intrusive clarificatory measures like emoticons or colour-coding. Inquisition represents a developer that has grown confident enough in the delicacy of its phrasing (though possibly not its often hilarious character animations) to do without such crutches – or, at least, to ambiguate them. Companions do register their opinions as ‘approval’ or ‘disapproval’ captions, but there are no loyalty bars to fall back on, so you must work out where precisely you stand from the wording alone. The old dialogue wheel returns, with kindly, neutral or careless and aggressive responses arranged from top to bottom, but for every conversation that pans out along one of those familiar axes, there’s a chat that escapes easy categorisation.

Your companions themselves are among BioWare’s most intelligent, and difficult, creations – perhaps the greatest compliment you can pay the writing team is that some of them get away with being actively unlikeable. The warrior cleric Cassandra is one of the easiest to read, all flinty righteousness and obstinacy in the face of death and small talk alike, a persona that supports a combat style built around tanking and rallying allies, and which predictably has its softer side. Derbyshire-accented Sera comes across as the usual oddball, mildly sociopathic, raunchy elven rogue, but there is a peculiar agitation at the core of the character, a barely restrained hatred of all hint of status or political manoeuvring. She’s often among the most carefree companions, but as a member of the ruling caste, you’re never quite sure of her feelings. Likewise Solas, an alternately pleasant and forbidding scholar who responds well to an inquiring mind, and who slowly completes a mural of your feats at Skyhold as the adventure unfolds. Perhaps the strangest of all is Cole, a troubled, gifted soul who is acutely conscious of traumas others keep hidden yet often at a loss to make sense of what they do or say. Each personality also sheds light on the others: changing up party in the field is, strictly speaking, unnecessary, as characters gain XP when not in use, but worth doing for the sake of the jokes, philosophical discussions and slanging matches you’ll overhear when odd bedfellows are thrown together.

If these characters mesmerise in conversation, they don’t always chime in other respects. Inquisition offers a broad range of class skill trees, but characters slop together a little dissatisfyingly. You will have at least two rogues, three mages and three melee damage-dealers or tanks to choose from, and it can be a headache to distinguish their contributions, at least until you unlock each companion’s unique skill tree. The combat itself continues the theme, with a camera that doesn’t pull out far enough for easy party management, and a cursor that hitches annoyingly on the scenery. The pathfinding is also patchy, especially when moving around larger opponents, though this is made up for by the ability to freeze time in order to lay down waypoints, and select which abilities your allies should favour or avoid in advance. While light on transformative mechanics, Inquisition’s lavish spellbook includes some feisty terrain control options. Delve into the Reaver skilltree and you can generate a ring of pain around your character, inflaming the ire of your enemies while boosting the damage you do to them. Opt for storm magic and you can summon a thundercloud which paralyses any foe that leaves its area of effect.

BioWare has a reputation for engaging with discussions about representation, race, gender and sexual orientation in its games, and Inquisition is an especially searching example. There is the opportunity to ask a character about his gender identity, a conversation that is all the more powerful for the game’s allowing you to say things that are truly crass. There is a quest that explores the horrible subject of homosexual ‘conversion therapy’, disguised as a more plodding RPG conceit about reuniting estranged family members. These moments of insight are, alas, matched with moments of great clumsiness: the treatment of elves as a catch-all motif for the oppressed and stateless, for instance, and the resurgence of Semitic stereotypes in the characterisation of dwarves as artisans and merchants.

The question, right now, is when or indeed, whether that journey will continue. The commercial failure of Mass Effect: Andromeda, a game that is broadly Inquisition in space with half the charm, appears to have wrought a change of priorities at BioWare and EA. A fourth Dragon Age is underway, but the departure of veteran writer David Gaider and Inquisition’s creative director Mike Laidlaw suggests that EA is taking the series and Mass Effect back to formula. Much of the blame for these reversals can be pinned on Andromeda’s muddled writing, tepid world and astonishing quantity of bugs, but the larger problem may simply be that projects as titanic and dense as this are too fiddly to engineer for too modest a return. The elephant in the room is BioWare’s new IP Anthem, an online service shooter that plainly covets the mantle of Bungie’s Destiny. Inquisition launched with an online PvE mode, albeit a forgettable one, and you could argue that a world as storied as this would shine with a social space, where fans of the lore could untangle backstory threads together. This hardly seems essential, however, when you consider how much the game achieves with age-old concepts, and how much remains to be done in terms of both the writing and the combat. If this does prove to be among the last of BioWare’s traditional singleplayer epics, it represents a castle left unfinished.